It’s been more than a decade since the Phoenix Suns were last in the playoffs. The Suns have only finished better than .500 once since they lost in the Western Conference Finals with Steve Nash and Amar’e Stoudemire in their last postseason appearance.

Phoenix is off to a good start this year though. This team is 8-5 with some quality wins, and the Suns will look to add another win when they take on the Denver Nuggets tonight.

Denver and Phoenix will play in back-to-back nights, squaring off on Saturday too. 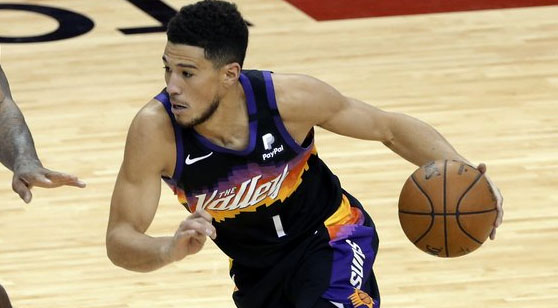 The Nuggets lost four of their first five games to start the 2020-21 season. Denver’s only victory came against Houston during that stretch. They lost to the Suns on New Year’s Day to move to 1-4 despite 31 points from Jamal Murray, as Will Barton and Gary Harris both struggled from the floor.

Denver has performed better over the last few weeks though. The Nuggets have won six out of their last nine games, and one of those losses was in overtime against Dallas. They went on the road and knocked off Philadelphia and hammered Oklahoma City 119-101 in their last game.

Nikola Jokic led all scorers with 27 points and provided 12 rebounds in that win on Tuesday night. Monte Morris was a big difference maker with 15 points and a plus/minus of +22 in his 21 minutes as the Nuggets outscored the Thunder by 23 points in the second and third quarters.

Phoenix got off to a nice start with wins in five of its first six games. The Suns struggled on the road with losses to Detroit and Washington though, and the latter loss was particularly tough as multiple Wizards players tested positive for COVID. That led to Phoenix’s next three games being postponed as the team was in quarantine.

They lost to Memphis in their first game back on Martin Luther King Jr. Day before going into Houston and knocking off the Rockets, 109-103 on Wednesday. Deandre Ayton led the Suns with 26 points and 17 rebounds on 11 of 15 shooting, while Devin Booker provided 24 points and shot better than 50 percent from the floor.

Jokic and Murray are two of the best in the league at the high pick and roll. The key to it all is Jokic as we have never seen a center with his vision and ability to distribute the ball.

Murray has had a nice season, averaging 19.2 PPG through 13 games. He has been league average in terms of his efficiency though.

The former Kentucky standout had a fantastic postseason, so expectations were high coming into this year, but he is making just 44.2 percent of his field goals and 34.5 percent of his threes. Murray only scored five points on 2-10 of shooting in Denver’s most recent game.

JaMychal Green has been a difference maker off the bench. The veteran gets a lot done during his time on the court, averaging 11.0 PPG and 6.8 RPG in just 20.9 minutes.

Paul Millsap can be a difference maker too, and Denver’s depth gives them an edge against most teams.

The inside-outside game between Ayton and Booker has turned Phoenix into a playoff contender. Ayton is a double-double machine with 13.9 PPG and 12.1 RPG this season. He is one of the best players on the offensive glass with 3.2 ORPG, and he swallows up teams that try to go small against him. His perimeter game has not been good though.

Booker leads the Suns with 22.2 PPG. He is shooting well, hitting 46.8 percent of his field goals, but he has only been average from downtown (34.2 percent). The one thing he needs to work on is getting into the lane and drawing contact as the Suns shoot the third-fewest free throws in the league and Booker is the only player on the roster averaging more than three FTAs a game.

Veteran Chris Paul has provided a steady hand in the backcourt for this young team. CP3 continues to get the best out of his teammates although he is at the tail end of his career.

Paul isn’t shooting particularly well (44.4 percent and 30.6 percent from three), but he is one of the best free throw shooters in the league and averages 8.2 APG with a 3.8 assist-to-turnover ratio.

Mikal Bridges is having a breakout year. The former Villanova star is making better than 51 percent of his field goals and 44.4 percent of his threes to become the second leading scorer on the Suns (14.7 PPG).

Bridges does a nice job of helping out on the glass too as Phoenix’s second leading rebounder behind Ayton.

The absence of Porter has been a big loss for Denver. He might be the second-best player on the team, averaging 19.5 PPG and 6.8 RPG while sinking 56.6 percent of his shots and 42.3 percent of his triples.

Porter hasn’t played in over three weeks, but he could be ready to return on Friday. His presence would likely lead to a small line move.

This young Phoenix team should be fun to watch as the season develops, but this isn’t a good matchup for them.

Although the Suns beat the Nuggets earlier this year, the pick and roll of Jokic and Murray will be too much this time, especially if Porter is back to help.