Interconference NBA action will take center-stage on Friday night with the Pelicans set to host the Bucks in primetime on ESPN, and VI is getting you ready with another slate of Best Bets and Game Previews to help handicap all the evening’s top matchups.

The Bucks head into Friday’s contest as a 7-point road-favorite over New Orleans, marking the fourth time that the Pelicans have been listed as ‘underdogs’ across their last four games.

While the total for this matchup currently sits at OU 229, which is the highest ‘over-under’ for a Bucks’ game since they played the Nets back on January 18th (O 239.5). 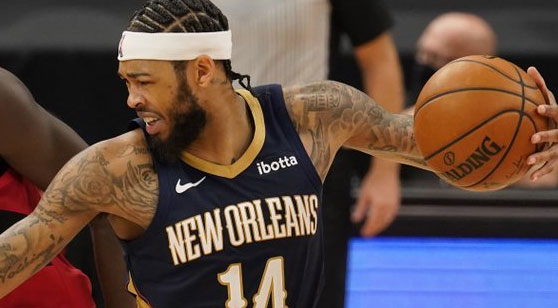 The Pelicans host the Bucks as underdogs on Friday night at Smoothie King Center. (AP)

The Bucks head into Friday’s contest coming off wins SU and ATS in each of their last two contests, which is a change of pace for them considering they failed to cover the spread in four consecutive games prior to their victories over the Hawks and Raptors.

Milwaukee’s most recent affair resulted in a 7-point victory over Toronto behind a season-high 20 points on 72.8% shooting from Brook Lopez, along with 24 points apiece from Khris Middleton and Giannis Antetokounmpo.

The Pelicans got back over the hump with a win and cover against the Wizards on Wednesday night – making that 2-8 SU in their last 10 games while finally snapping a three-game losing streak.

Although an 18-point victory may not be indicative of a closely contested matchup, it took every bit of Zion Williamson and Brandon Ingram’s 64 combined points to hold off the Wizards on Wednesday night.

Bradley Beal poured in his 47th point of the contest to cut New Orleans’ led down to single digits in the fourth quarter, but ultimately the Pelicans ended up pulling away with ease down the stretch.

After winning both contests against New Orleans last season, the Bucks have now won in four consecutive matchups against the Pelicans – with New Orleans’ only loss by 10 points or less across that stretch containing Anthony Davis and Jrue Holiday in the starting lineup for the Pelicans.

Despite the rest of his team’s offensive inefficiencies, Ingram shined in both matchups against Milwaukee last year – going for 25 and 32 points in the two losses.

J.J. Reddick also went crazy in one of the matchups – racking up 31 points on 62.5% shooting, but it still wasn’t enough to bring down the top seed in last year’s Eastern Conference in a contest.

The Bucks paid a hefty price to New Orleans for Holiday this past offseason and since his acquisition, it has been hard to spot a significant difference in their offensive efficiency numbers.

Milwaukee is currently scoring just one point more per game than they did a year ago, while shooting at nearly identical scoring clips from last season (119.8 ppg, 48.7% FG, 39.3% 3PFG).

Milwaukee isn’t winning games as efficiently as last year though, considering they have already almost lost half as many games as they did last season and currently own a losing record ATS (8-9).

The last five times the ‘over-under’ for a Bucks game has sat between 225.5 and 230, the game has gone 'under' the total, which is where it sits tonight.

Nobody expected the Pelicans to be contenders in the Western Conference heading into this season, but I also don’t think people expected them to be as bad as they have been recently – losing eight of their last ten games to bring their SU and ATS records both to 6-10 on the year.

The ‘over’ has cashed in five consecutive Pelicans games now – making that 10 ‘overs’ in New Orleans last 11 matchups. Make note though, that nine of the matchups across that stretch contained an ‘over-under’ less than 220. (Friday's total – 228.5).

Former number two overall pick, Lonzo Ball, is listed on the Pelicans’ injury report as ‘Day-To-Day’ with an ankle sprain that he suffered in New Orleans victory over the Wizards on Wednesday.

If Ball is unable to suit up, look for Josh Hart and Nickeil Alexander-Walker to eat up the majority of those minutes.

All eyes will be on Holiday this Friday night, with the All-Star guard set to make his first appearance in New Orleans since the Pelicans traded him to Milwaukee this past offseason.

Jrue really struggled in his most recent outing against the Raptors – scoring just seven points on 3-14 (21.4%) from the field during Milwaukee’s victory. Prior to that game though, Holiday had scored 15 or more points in five consecutive contests and 20+ in three of those matchups.

I’ll back Jrue to bounce back in this contest with 15 or more points against his old team on Friday night.

The Pelicans head into Friday night’s contest having lost eight of their last ten contests, with their only victories across that stretch coming against subpar competition (Wizards, Kings).

While on the other hand, Milwaukee has won eight of its last 12 games, with their only losses during that period coming in blockbuster matchups against premier competition (Lakers, Nets, Jazz).

The Bucks appear to be a little undervalued heading into this matchup on Friday night. I’ll lay the points with Milwaukee here.