Interconference NBA action will take center-stage on Saturday night with the Celtics set to host the Lakers in primetime on ABC, and VI is getting you ready with another slate of Best Bets and Game Previews to help handicap all the evening’s top matchups.

The Lakers come into Saturday’s contest as a 2-point favorite – already marking the sixth different team that the Celtics have been listed as an ‘underdog’ against so far this season.

While the total for this contest currently sits at OU 218.5, with both Boston and LA both cashing ‘under’ tickets in each of their last two contests. 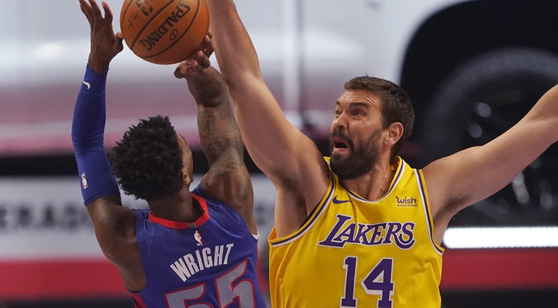 After winning their first 10 road games of the season, the Lakers have suffered back-to-back losses in their last two games. (AP)

The Lakers head into Saturday night’s matchup riding their first 2-game losing streak of the season – coming off losses to the Sixers and Pistons in each of their last two matchups.

In the Lakers most recent loss to the Pistons, Kyle Kuzma filled in for the injured Anthony Davis and while his defense may not be up to par with AD’s, he still managed to give them a spark in the scoring department – racking up 22 points on 9-17 from the field across 29 minutes.

On the other side of things, the Celtics have lost four of their last six contests, but their recent failures can be chalked up primarily to the fact that Jayson Tatum tested positive for COVID-19 a few weeks ago – sidelining a significant portion of Boston’s rotation.

Boston’s starters went off for 81 combined points in their most recent affair with the Spurs but it still resulted in a 4-point loss as Boston’s lineup still lacked the firepower required to topple San Antonio this past Wednesday.

Boston and Los Angeles split a pair of games during last year’s regular season, with an average of 236 total points per game being scored across those two matchups – easily cashing the ‘over’ in both meetings.

The first matchup between these teams was all about Boston’s Big 3 – with Tatum, Jaylen Brown, and Kemba Walker all chipping in 20+ points in a 32-point Celtics victory.

While the second contest between Boston and L.A. resulted in a 2-point Lakers victory, as LeBron James and company were barely able to claim their revenge behind 29 points from King James and 32 points from AD.

After dropping a third consecutive game against the spread in a loss to the Pistons on Thursday, Lakers bettors now find the defending champs sitting at 10-10 ATS on the season – ranking just 17th in the league in ATS record.

The Lakers are 4-2 ATS on the year in contests in which they are favored by six points or less though – which is what we have for the seventh time already this season on Saturday night.

While picking the right side of Lakers spreads has been nearly an impossible task so far this season, ‘unders’ have been a reliable wager in matchups containing the L.A. this year – with four of their last five games staying under the total, making that 14 ‘unders’ in just 20 contests so far this season.

Backing the Celtics as ‘underdogs’ has paid very well so far this season – with Boston owning a 6-1 record ATS in contests that it has not been favored in while winning four of those matchups SU.

While the ‘under’ has cashed in back-to-back Celtics games, it is important to note that the total for both of those matchups was in the mid-220’s.

Prior to Boston’s most recent two contests, the ‘over’ hit in three consecutive matchups bearing totals similar to the one we are seeing for Saturday’s tilt with the Lakers (OU 218.5).

James and Davis are both listed on the Lakers injury report with minor injuries ahead of Saturday’s primetime tilt for the Celtics.

While LeBron’s injury is known to not be significant, the status of Davis still remains unclear, considering the former All-Pro sat out during the Lakers most recent loss to the Pistons with a bruised quad.

While Brown may not currently be the top scoring option in the Celtics starting lineup, he is still Boston’s leading scorer so far this season – averaging 27.1 points per game on 52.2% from the field and 44.1% from 3-point territory.

Brown has scored 24 or more points in six consecutive contests, now making that 12 of 17 games so far this year that he has eclipsed that total.

Back him to make it a seventh straight game with 24+ points, as the Celtics will likely need scoring explosions from both Tatum and Brown if they intend on competing with the Lakers on Saturday night.

The Lakers head into Saturday night’s tilt with the Celtics following back-to-back losses for the first time this season and while that may lead to many bettors electing to stay away from L.A. in this game, I see this situation as an even greater opportunity to back the defending champs in a bounce-back scenario.

I’ll back the Lakers to get back on track with a win over Boston on Saturday night.