Philadelphia is atop the Eastern Conference. The 76ers have been the most impressive team in the East with Joel Embiid playing like an MVP candidate. However, they haven’t been as dominant on the road as they are at home.

The Sixers are just 4-5 away from Philadelphia this year. Indiana will look to take advantage of Philly’s road woes when the Pacers host the 76ers on Sunday night. 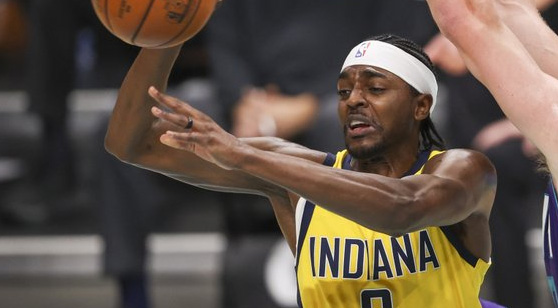 After splitting a two-game set at Charlotte, the Pacers will be looking to get back on track Sunday against Philadelphia. (AP)

Indiana started the season on fire. The Pacers were 6-2 through their first eight games. Then, they dealt Victor Oladipo in the massive four-team trade that sent James Harden to the Brooklyn Nets.

Indiana received Caris LeVert from Brooklyn in the trade, but he has yet to play and there is no timetable for when he will be available.

A routine physical found a mass on LeVert’s kidney before the trade was finalized, and he only recently underwent surgery to treat the issue. Fortunately, LeVert is expected to make a full recovery.

Without Oladipo or LeVert, the Pacers have taken a noticeable hit, and they are 3-4 in their last seven games. They needed overtime to get past Orlando at home before splitting with Toronto and Charlotte over their last four games.

Domantas Sabonis had a double-double against the Hornets on Friday night, but it wasn’t enough for Indiana to beat Charlotte. The Hornets edged the Pacers 108-105 as Indiana could only make 31.4 percent of its threes on the evening.

Philadelphia has won five of its last six games. The 76ers showed they were a team to be reckoned with after their 107-106 win over the Los Angeles Lakers on Wednesday, and they cruised to a 118-94 victory over the Minnesota Timberwolves on Friday.

Joel Embiid was dominant in the blowout win. He went to the free throw line 18 times, and he led all scorers with 37 points. Embiid had over twice as many points as anyone else on the 76ers.

Embiid has been lights out this season. The center is averaging 28.3 PPG and 11.1 RPG on the year. He appears to be in the best shape of his career, and the sky is the limit for Philadelphia as long as he stays healthy. Embiid is making 54.4 percent of his field goals and 40.4 percent of his threes, making him one of the toughest players to guard due to his size and versatility. The three-time All-Star is also playing great interior defense.

Ben Simmons remains the X-Factor for this team. If Simmons can take his game to another level, the 76ers might be able to win their first NBA title since 1983. Simmons isn’t much of a scorer (12.9 PPG), and we know about his struggles in the half court.

However, Simmons is superb in every other area of the game with 8.3 RPG, 7.9 APG, 1.6 SPG, and almost a full block per game as a point guard. Simmons appeared to have some success guarding LeBron James on Wednesday night too.

The second leading scorer on the 76ers is Tobias Harris. The veteran swingman has made the most of the opportunities created by Embiid and Simmons, making 51.4 percent of his field goals and 46.8 percent of his threes.

Seth Curry has been a big difference maker. He is knocking down an absurd 51.7 percent of his treys while averaging 4.6 3PA a night. Curry doesn’t impact the game in other ways, but you don’t have to if you are shooting that well from beyond the arc.

Malcolm Brogdon is having his best season yet. He struggled in his first season with the Pacers last year, but he has been a much better shooter and is making an even bigger impact on defense.

Brogdon is making 45.6 percent of his field goals and 40.4 percent of his threes while posting a career-high 22.7 PPG. Additionally, he is averaging 1.4 steals per game to highlight his individual defensive contributions.

Sabonis is continuing to develop as well. He is averaging 20.5 PPG and 12.2 RPG through 19 games. His three-point shooting has considerably improved from last year as he is knocking down 36.2 percent of his threes. That ability to move him beyond the three-point line has helped make this offense more efficient, allowing Brogdon the opportunity to create more space.

Although Sabonis is averaging a double-double, Indiana is one of the worst rebounding teams in the league. The Pacers are only pulling down 42.6 rebounds as a team each night. Myles Turner is averaging 6.8 RPG, but no other player on the team has been able to average more than 5.0 RPG.

The Pacers have really struggled with their perimeter defense too. Opponents are making 39.4 percent of their threes against Indiana on the year. That has led to a normally reliable defense being a subpar unit despite the presence of Brogdon.

Philadelphia is going to keep it rolling in Indianapolis on Sunday evening. Sabonis won’t be able to slow down Embiid, and Simmons should be able to keep Brogdon contained.

Indiana doesn’t have a real great scoring option besides those two players, so this could get ugly.