The second half of ESPN’s Wednesday night double-header is set to be a Western Conference showdown between the Phoenix Suns and the New Orleans Pelicans, and VI is getting you ready with another slate of Best Bets and Game Previews to help handicap all the action.

Phoenix heads into this game as a 2-point favorite, marking just the sixth time this season that the 7-12 Pelicans have been listed as an ‘underdog’ against a Western Conference opponent.

While the total for Wednesday’s contest sits at OU 223.5, which is the first time the ‘over-under’ for a Suns game has been set higher than 220 since they played the Wizards back on January 11th. 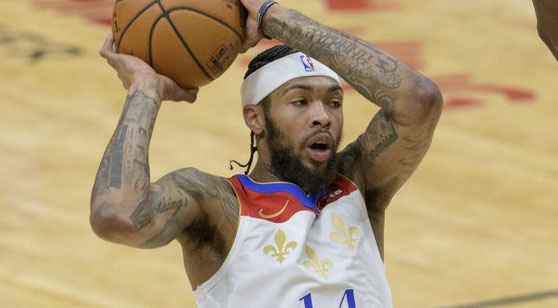 The Pelicans look to end a two-game home slide as they welcome in the Suns on Wednesday night. (AP)

The Suns come into this contest riding a three-game winning streak SU and ATS, with the first two of those victories coming without Devin Booker (hamstring) in the lineup.

Fortunately for Phoenix though, Booker returned to the lineup in dramatic fashion during the Suns most recent affair – capping off a 24-point night with a game-winning three-pointer with under two seconds remaining to sink the Mavericks for the third time already this season.

On the flip side of things, the Pelicans come into Wednesday’s matchup having lost four of their last six games while being favored in three of those losses. Their most recent matchup resulted in a 9-point loss to the Sacramento Kings, as De'Aaron Fox shredded New Orleans’ guard tandem for 38 points and 12 assists on 11-14 from inside the arc.

During last year’s regular season, Dallas and Phoenix split a pair of tightly contested matchups, with the average margin of victory being just five points across the two games.

In the Suns' first matchup against the Pelicans since acquiring Chris Paul though, they absolutely dominated – as Phoenix managed to build a 22-point first-half lead and then cruised to the finish line in a 111-86 rout.

The Pelicans were brutal from 3-point territory in their loss to the Suns earlier this season – shooting a combined 3-24 from beyond the arc, led by Lonzo Ball and Brandon Ingram who shot a combined 2-12 from deep.

The new-look Suns got off to scorching hot start to the year ATS – covering the spread in five of their first six games to kick off the season. But have since then returned to earth, going 6-7 ATS in their past 13 contests.

Phoenix ranked ninth in the NBA in pace last year (101.7) – running at a faster statistical tempo than both the Warriors and the Nets did last season, who currently both rank in the top five in pace again this year.

But the addition of Paul to the lineup seems to have slowed down the rate at which the Suns are taking shots this season, ranking 26th in the NBA in pace since the acquisition of the former All-Pro guard.

That change-in-pace seems to have been a tough change to analyze for bettors and oddsmakers so far, considering they have allowed the ‘under’ to cash in 12 out of 19 Suns’ games this year.

The Pelicans had a streak of seven straight ‘overs’ snapped in their most recent contest, with the total for New Orleans’ matchup against the Kings being set at OU 235.5 while they combined for just 227 points in the game.

New Orleans currently owns the second worst record in the NBA against the spread – covering in just three out of the ten contests that they have been favored in.

The Pelicans clearly do not have trouble scoring the basketball, currently averaging over 110 points per game through the first part of this season. But they do have plenty have trouble trying to keep other teams from scoring – ranking 22nd in points allowed per game and 23rd in overall defensive efficiency.

Newly acquired, Steven Adams, missed his first contest since joining his new team with a calf injury in the Pelicans most recent affair with the Kings on Monday.

Adams was listed as questionable prior to that matchup, so he will look to get cleared ahead of Wednesday’s tip-off after catching a few more days of rest.

Regardless of his performance over the last two games (31.4% FG), Ingram is still the Pelicans top scoring option and that typically shows through in closely contested matchups – BI averaging 30 points per game in each of New Orleans past two victories.

Ingram has scored 28 or more points in three of his last five games, giving him seven of that nature so far this season. I think the Suns are the much better team in this matchup under their current construction, but I wouldn’t put it past Ingram to keep this contest interesting with another 30-point explosion, which should be enough to be the game’s leading point scorer (Booker and Williamson – only four combined 30-point games this season).

The Suns have won and covered in three consecutive contests now, propelling them to the 5th in the NBA against the spread with a record of 11-8.

While the Pelicans have been favored in each of their last two matchups and failed to claim SU victories in both of those, pulling their ATS record down to second-worst in the league at 7-12.

I think the Pelicans are a little over-valued here, per usual. Back the Suns to pickup a clean victory over New Orleans on Wednesday night.