Western Conference NBA action returns to TNT on Thursday night with another star-filled matchup between the Dallas Mavericks and the Golden State Warriors, and VI is getting you ready with more Best Bets and Game Previews to help handicap all the top games on tonight’s slate.

The Warriors come into Thursday’s contest as a 2.5-point ‘underdog’ – despite the fact that the Mavericks currently sit in 13th place in the Western Conference standings with a 9-13 SU record.

While the total for this matchup currently sits at OU 226, which is the highest ‘over-under’ for a Mavericks game since they played the Bulls on January 17th (OU 225.5). 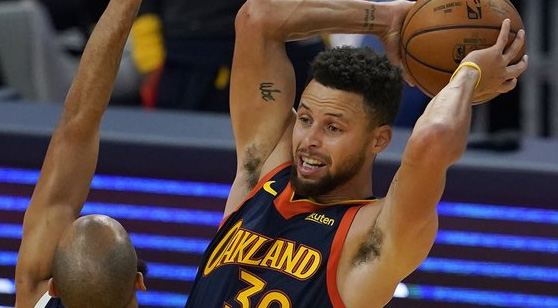 The Warriors have struggled to a 3-5 road mark, which includes a 1-3 record in their last four games. (AP)

The Mavericks have been favored in four of their last seven contests but somehow managed to lose all but one of those games, with three of those losses coming by 12 points or more.

Dallas most recent two losses came during a double-header with the Suns this past weekend, as the first of those defeats came without Devin Booker in the lineup for Phoenix.

Last night though, the Mavericks managed to finally snap a 6-game losing streak with a win over the Atlanta Hawks – with Dallas picking up its first victory since their win over the Spurs on January 22nd.

On the other hand, the Warriors come into this contest having won three of their last five games, with their only losses across that stretch coming in matchups with the Suns and Celtics.

Stephen Curry did everything in his power to keep the Warriors alive in their most recent affair with the Celtics, but his 38 points on 7-14 from deep still wasn’t enough to push Golden State over the edge against Jayson Tatum and company.

The Mavericks and Warriors put on a very boring 3-game series during last year’s regular season, as Dallas won all three matchups by 20 points or more – with the largest of those blowouts eclipsing a 48-point margin (142-94).

Curry did not participate in any of those contests though, so any recent history between these teams should be analyzed with a skeptical eye.

Despite the injury to Klay Thompson prior to the start of the season, the Warriors are off to a surprisingly solid start – going 11-10 across their first 21 games, sitting just half a game out of a playoff spot in the Western Conference.

Golden State’s success so far this season can be mainly attributed to Curry returning to MVP-form – scoring 24 or more points in nine of his last ten games, while shooting 45% or better from deep in seven of those.

The ‘under’ has cashed in three consecutive Warriors games now, bringing the ‘over’ down to 9-12 on the year after getting off to a 9-9 start in their first 18 matchups.

The Mavericks head into Thursday’s contest as a short favorite for a fourth consecutive game, despite the fact they currently trail the Warriors by three games in the Western Conference standings while picking up losses in six of their last seven matchups (SU and ATS).

Typically, the Mavericks ongoing paradox is the fact that they score a ton of points and do not play very good defense, but lately the scoring hasn’t been there for them and it has resulted in an ugly stretch of games – scoring 109 points or less in eight of their last 12 contests, while allowing 115 or more points in seven of the games across that span.

While the Mavericks do not appear to have a single name on their injury report ahead of this contest, the Warriors come into this matchup short-handed in the frontcourt with both James Wiseman and Kevon Looney both expected to miss Thursday’s tilt with injuries.

Juan Toscano-Anderson turned in his largest minutes output of the season once Looney went down on Tuesday (26 minutes), so look for him to continue assuming an expanded role in the rotation until one of Golden State’s big men is able to return.

Draymond Green has still played his typical 25-30 minutes per game for the Warriors so far this season, while averaging a typical number of rebounds and assists (6.8 reb, 5.1 ast).

But he hasn’t managed to keep up in the scoring department like he has in the other phases of his game – currently averaging 4.6 points per contest, while cracking double-digits just twice so far this year.

The last time Green managed put up 8 or more points in a game was during the Warriors 22-point rout of the Timberwolves back on January 25th – which was just the third time he had accomplished that feat all season. I’ll back Green to stay under 8 points in a fifth consecutive matchup against the Mavs on Thursday night.

The Mavericks come into Thursday night’s contest having lost six of their last seven games, with losses to Phoenix (2), Utah (2), Denver, and Houston spanning the last week or so. They were finally able to get back over the hump in their most recent affair though, with a win and cover against the Hawks on Wednesday night.

The Mavericks possess the talent to completely turn their season around, and I think they are catching Golden State at an ideal spot given the recent injuries in its frontcourt. I’ll back Dallas to cover in a second straight matchup during Thursday’s night cap.