The Utah Jazz will host the Indiana Pacers in a rare Friday afternoon game in Salt Lake City. Utah comes into this game with the best record in the NBA, but the Phoenix Suns and Los Angeles Clippers are hot on their heels.

Meanwhile, Indiana is currently one game behind the Charlotte Hornets for the No. 8 seed in the Eastern Conference. 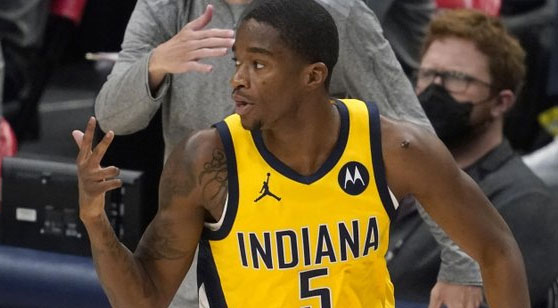 The Pacers continue their road trip as they seek revenge against the Jazz for a February home loss. (AP)

Utah has held the best record in the league for much of the season. The Jazz have gone on multiple long winning streaks, winning 11 games in a row in January and picking up nine straight victories on two other occasions this season. That most recent run saw Utah stay flawless from March 19 to April 3, but the last couple weeks has been up and down for this team.

The Jazz are 3-3 over their last six games. They lost back-to-back road games to Dallas and Phoenix early last week, and they suffered a frustrating loss as a double-digit home favorite against Washington on Monday.

Utah has won its other three games in the middle of this homestand though. The Jazz knocked off Portland and Sacramento late last week and defeated Oklahoma City 106-96 on Tuesday night.

The oddsmakers made the Jazz one of the biggest favorites we’ve seen all season. Utah was favored by 16.5 points over Oklahoma City, but the Thunder kept it within the number thanks to a 42-point performance from Luguentz Dort.

Mike Conley had 14 assists for the Jazz, who took their foot off the gas pedal after taking a 19-point lead into the fourth quarter.

Indiana was sputtering at the end of last month. The Pacers were 21-25 coming into April, but they have won five of their last seven games. Those tilts haven’t been against the toughest of opponents though as San Antonio and Memphis are right around .500, and Orlando, Minnesota, and Houston have essentially packed it in for the year.

Caris LeVert led Indiana with 27 points in Wednesday night’s win over Houston. Domantas Sabonis and Malcolm Brogdon each recorded a double-double as the Pacers took a 20-point lead into halftime on their way to a 132-124 win over the Rockets.

Brogdon has been the leader for the Pacers this season. He ranks first on the team with 21.4 PPG, and his 6.0 APG are second on the team to T.J. McConnell. Brogdon was prioritized in free agency because of his ‘three-and-D’ skillset, and he is the best perimeter defender on the team. He is also one of two players making more than 40% of their threes on the Pacers.

LeVert is starting to turn it on. He is making 49.3% of his field goals in April, and he is averaging 29.0 PPG over his last three games. However, he has really struggled from beyond the arc, making just 29.5% of his treys this month.

The major interior threat for the Pacers is Sabonis, who is averaging 19.9 PPG and 11.5 RPG for Indiana. He is playing big minutes in recent weeks as Indiana is fighting to make the playoffs, and that has led to Sabonis recording a double-double in nine straight games.

Sabonis' three-point shooting has been abysmal though as he made just 13.3% of his triples in March and is making 23.1% of his threes this month.

Utah is thriving in the ‘three-and-D’ era of the NBA. The Jazz rank third in the league in three-point shooting, hitting 38.9% of their threes collectively. That has helped them become the third-highest scoring offense with 117.0 PPG.

Donovan Mitchell leads the Jazz with 26.5 PPG. He is making 43.8% of his field goals and 38.5% of his threes, and he ranks second on the team in assists with 5.3 APG. Mitchell exploded for 42 points in back-to-back games against Sacramento and Washington, and he averaged over 40 PPG in a four-game stretch before Tuesday’s win over the Thunder.

Veteran point guard Mike Conley has never made an All-Star team, but he has always been one of the better guards in the NBA. He is making 45.1% of his field goals and 41.6% of his threes this season. Conley leads the team with 5.6 APG, and his defense has improved over the course of the year.

Sixth Man of the Year frontrunner Jordan Clarkson did not have a good March. He made just 34.5% of his field goals and 29.3% of his threes, and he is questionable to play in this game as he continues to deal with a sprained ankle that has bothered him over the last week.

Utah has a lot of advantages over Indiana. The Jazz will be playing at home, and they will have more rest after having the last two days off. Rudy Gobert has mitigated Sabonis’ impact on the interior in their recent meetings, so the Jazz should be able to pick up a rather comfortable win.