The Los Angeles Lakers (35-23) head to the Metroplex to battle the Dallas Mavericks (31-26) at American Airlines Center for a 9:30 p.m. ET tip-off in a nationally-televised game on TNT.

The Lakers were humbled 111-97 against the Utah Jazz on Monday night just two nights after dealing Utah a 127-115 loss in overtime. The Lake Show has been rather erratic lately, alternating wins and losses in each of its past 12 games. They're also 6-6 ATS across the span.

The Mavericks picked up a much-needed 127-117 win against the Detroit Pistons at AAC on Wednesday night, but now have the quick turnaround against the wounded, but still very dangerous defending champs less than 24 hours later.

The big news in this one is that Anthony Davis (calf) looks like he will make his much-anticipated return, as the Lakers get one of their big stars back from injury. He has been sidelined with a strained right calf since Feb. 14. Of course, with every bit of good news, there is bad news, as head coach Frank Vogel said Wednesday that there is no update on LeBron James (ankle).

Still, the potential return of 'The Brow' is big for this game, as well as for bettors. The game was OFF the board until Thursday morning. A.D.'s return flips this game from a coin-flip game of sorts to the Lakers as decisive favorites. 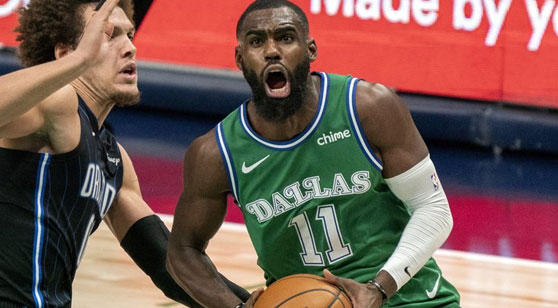 The Mavericks play with no rest on Thursday night as they welcome the Lakers in a Western Conference showdown. (AP)

The Lakers have tumbled in the Western Conference standings with Davis and LeBron on the shelf, but A.D. is on his way back, and LeBron is reportedly a week behind. So it looks like the defending champs are about to right the ship just in time.

The Lakers were listless in a 111-97 loss against the Jazz, but a split against the team with the NBA's top record without their top two stars gives them a lot of optimism going forward. Despite the injury issues, they're still just 8.5 games back of the top spot in the West, and three games back of the Denver Nuggets for home-court advantage in the first-round of the playoffs.

The Mavs saw six scorers hit double digits in Wednesday's 10-point win over the Pistons, just missing the cover at most shops. Luka Doncic went off for 30 points, 10 rebounds and nine assists with four triples and just three turnovers. Dallas hit 46-of-92 from the field, or 50%, while dumping in 16 triples.

The last time these teams faced each other, L.A. was whole, and they were dropping down the chimney of the Mavs and passing out the Christmas coal with a 23-point beatdown at Staples Center.

The Lakers have covered four of their past five trips to Dallas, and they're 6-1 ATS in the previous seven meetings, including the Christmas Day massacre.

The Lakers are still a pretty solid 4-1 ATS across the past five road games despite the fact they have been shorthanded. They're also 5-1 ATS in the past six on the road against teams with a losing home record, and 6-0 ATS in the past six following a straight-up loss. So all of those trends are rather promising if you like the purple and gold on Thursday.

L.A. is also rested, a luxury Dallas doesn't enjoy here. The Lakers have hit the UNDER in each of the past four when enjoying two days of rest, and they're 17-5 ATS in the past 22 appearances on Thursday, for whatever that's worth to you. More importantly, the UNDER is 13-6 across the past 19 after a straight-up loss.

The Mavs barely missed the cover Wednesday, but since most shops had it at 10.5 to close, we'll give them a non-cover. As such, that's 0-6 ATS across the past six games overall, including 0-5 ATS in the past five games at home.

As far as the total is concerned, the UNDER is 11-3 in the past 14 games at home, while going 10-1 in the previous 11 against opponents with a winning percentage over .600. Toss in the fact the UNDER is 4-0 in their past four when playing on no rest and the UNDER is looking like a rather tasty play.

The Lakers will be excited to welcome back Davis, although you can expect he'll likely have some sort of restrictions. Still, it's a huge upgrade over the likes of Montrezl Harrell, Markieff Morris, etc. Look for a slow start, as the team folds him back into the mix. I'd even play the Mavericks on the first-half line, then go the other way in the second.

L.A. should put it together in the second half barring any kind of a setback for Davis in the final 24. The Lakers should also find it to their advantage that the Mavs just played Wednesday and could have some heavy legs.