The race to avoid the play-in round has made the regular season as meaningful as it’s been in years. There is a strong push in both conferences to finish in the top six, and the Atlanta Hawks and Portland Trail Blazers are two of the teams looking to finish above the line.

Atlanta is currently tied with Miami for the No. 5 seed at 35-30. Boston is just a game behind those teams, so the pressure is on for the Hawks to keep it up over the last two weeks.

Meanwhile, Portland is battling it out with Dallas and the Los Angeles Lakers for a top-six seed. All three teams are 36-28, but they are fighting for two spots to avoid the play-in round. 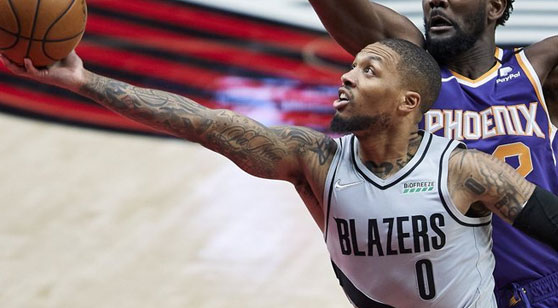 The Blazers have started their road trip 3-0 as they look for another win on Monday at Atlanta. (AP)

The Hawks have played well over the last couple months, and they are set to return to the playoffs for the first time in four seasons. They were 14-20 at the end of February, but they won eight in a row at the start of March and kept it rolling from there. We saw Atlanta get off to a nice start in April too, winning seven of its first eight games to kick off the last month.

Atlanta had lost three in a row before beating Chicago at home on Saturday. The Hawks suffered a bad loss to the Pistons in Detroit on Monday, and that was followed up with consecutive losses in Philadelphia by a total of 66 points.

A return home was needed for this team as the Hawks are 19-11 at State Farm Arena and 16-19 on the road this season.

Trae Young led all scorers with 33 points as Atlanta beat Chicago, 108-97 in the Hawks’ most recent game.

Young went 9-of-14 from the floor and got to the free throw line 12 times in the win. Clint Capela and John Collins both recorded double-doubles in the win, and the Hawks held the Bulls to just 25% from beyond the arc.

When these teams squared off in Portland in mid-January, the Blazers pulled out a 112-106 win despite being limited in the frontcourt. Damian Lillard was the best player on the court with a game-high 36 points with seven rebounds and seven assists. The Hawks made just 20% of their threes in the loss.

Portland has now won four straight games after losing five in a row two weeks ago. The Blazers have been streaky, but that has worked in their favor recently with some great offense away from the Rose City. They have finished with at least 128 points in each of those four victories, and all those wins have been by at least 10 points.

We saw the Blazers knock off the Celtics, 129-119 in Boston on Sunday night. C.J. McCollum was the star last night with 33 points on 12 of 20 shooting. Lillard added 26 points and Norman Powell had 23 points as Jaylen Brown and Marcus Smart had off nights for Boston.

Lillard is a six-time All-Star that has become one of the best guards in the league during his time in Portland. He is putting up similar numbers to Young, but he is more effective than his counterpart. Lillard has scored at least 20 points in eight straight games, and he is masterful at getting to the line.

It had to be encouraging for McCollum to have a big night on Sunday given his recent struggles. Portland’s No. 2 guard started the season red hot, but he had since cooled off considerably over the past couple months.

McCollum will need to get going again to take the pressure off Dame if the Blazers are going to make a deep run in the playoffs.

Enes Kanter and Jusuf Nurkic are known commodities for Portland in the middle.

Kanter and Nurkic are nice offensive weapons that can post double-doubles, but both players struggle to stop opponents in the block. That will be what opponents target with this team.

Young is having a nice third season with Atlanta. He leads the team with 25.5 PPG and 9.4 APG, and he is a little more efficient than he was in his first two years.

The former University of Oklahoma standout still needs some help in this area though as he is only making 43.4% of his field goals and 35.9% of his threes, and he consistently ranks as one of the worst perimeter defenders in the NBA.

Collins is having a fine season as the Hawks’ second leading scorer. The addition of Capela has led to him playing away from the basket more, and he has made the most of his chances.

Capela is consistently a double-double threat with 15.4 PPG and 14.5 RPG playing the same role he did in Houston. He is the third leading scorer among eligible players, but Capela isn’t much of an offensive threat.

That means someone else will need to carry the load with De’Andre Hunter and Cam Reddish out, and Bogdan Bogdanovic questionable to take the court on Monday.

Portland ranks 5th in scoring offense and 24th in scoring defense, as the average Blazers’ game has 230 points. Atlanta is more in the middle of the pack in both categories because this defense has improved steadily over the last couple seasons.

The Hawks play great perimeter defense, holding opponents to 34.7% from beyond the arc, so the 'under' is the play.