Non-conference NBA action will resume on Wednesday night with the Hawks set to square off with the Suns at eight o’clock Eastern Time in Atlanta, Georgia.

Phoenix enters Wednesday’s contest as a one-point favorite against the homestanding Hawks, which is the third game Atlanta has been an underdog in the last five contests.

The total for this event currently sits at OU 228 – marking the eighth Hawks’ game since the start of April to have an over-under set above 225 (20 games). 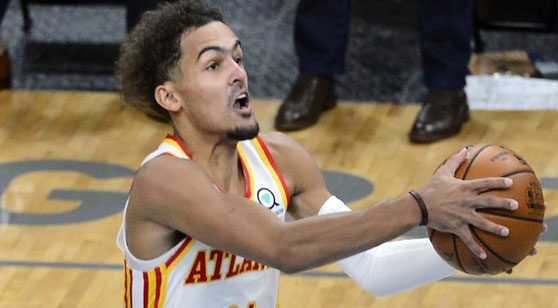 Trae Young and the Hawks look to capitalize off a win over Portland as Atlanta hosts Phoenix on Wednesday. (AP)

The Hawks head into Wednesday after splitting their last four contests with Atlanta’s victories during that timeframe coming in matchups against the Bulls and Blazers, and their losses coming in a two-game mini-series against the Sixers.

Atlanta’s most recent affair resulted in nine-point victory over the Blazers – as 20-point performances from Trae Young, Bogdan Bogdanovic, and Danilo Gallinari wound up being enough to propel the Hawks past Damian Lillard and company, rather easily.

On the flipside, Phoenix heads into this contest riding a five-game winning streak – with the Suns most recent loss coming in a shootout against Brooklyn over a week ago.

Phoenix’ most recent victory came in a matchup against Cleveland just last night – as the Suns ended up requiring five extra minutes of action to take care of business in an event they were favored by double-digits in (CLE +12.5).

Phoenix and Atlanta split a pair of matchups during last year’s regular season – with both of those contests cruising over the total set for Wednesday’s affair (OU 228).

The most recent meeting between these teams carried an ‘under’ result though, and a victory for Phoenix as seven different Suns’ players eclipsed double-digit scoring on the way to a seven-point win for Devin Booker and company this past March.

The Suns enter Wednesday boasting wins in 17 of their last 21 games – currently giving Phoenix the second-best record in the NBA (46-18), which falls just one game behind the league-leading Jazz.

Betting the 'over' in Suns’ games has slowly become one of the most profitable plays in the league this season – with the total currently sitting at 35-29 clip in matchups containing Phoenix so far, which ranks second among the West in that department.

That trend of high-scoring affairs just seems to keep on rolling too – considering the total has gone 'over' in 15 of the last 20 Suns’ games.

Atlanta heads into Wednesday sitting in prime position for securing a spot in this year’s postseason – currently trailing the Eastern Conference-leading Sixers by eight games, yet find themselves positioned seven games ahead of Washington – which is currently the nearest squad on the outside-looking-into the playoff picture.

Betting the total in Hawks’ games has been a roller-coaster ride this season – with the ‘over’ cashing in roughly 49% of matchups containing Atlanta so far this year, which ranks 18th across the league in that department.

Make note though, there has been some newfound consistency in scoring-volume during Atlanta’s most recent stretch of contests – considering the total is 5-8 across the Hawks’ latest window of matchups.

Young had a tough night on offense during Atlanta’s loss to the Blazers on Monday night – considering the Oklahoma-product scored just 21 points on 37.5% from the field at the root of a nine-point win and cover for Portland.

Prior to this past Monday though, Young had scored 25 or more points in four of his last five games – with Trae’s lowest scoring output during that timeframe coming in a double-digit loss to the Knicks that he still managed to throw up 20 points in.

I’ll back Young to go 'over' that number again here, as the Hawks are going to need a big night from him on the scoreboard to keep up with some of the league’s best in this one.

The Suns head into Wednesday’s contest tied with Utah for the top spot in the Western Conference thanks to their current five-game winning streak – with Phoenix most recent loss coming in a shootout against Brooklyn over a week ago.

Atlanta heads into this event after splitting their last four contests 2-2 – with the Hawks’ victories during that stretch coming in matchups against Chicago and Portland, and their losses coming in a two-game mini-series against Philadelphia.

I’ll back Phoenix to extend its winning streak here – considering the Suns are the far better team in this matchup, and currently aren’t laying any points.