We will see a potential NBA Finals preview on Saturday night when the Denver Nuggets play host to the Brooklyn Nets. Brooklyn is the overall favorite to win the 2020-21 NBA Championship according to the oddsmakers, while Denver has the probable league MVP in Nikola Jokic.

The Nuggets and Nets have both already assured themselves of a top four finish in their conference, so they will both host a first-round series. 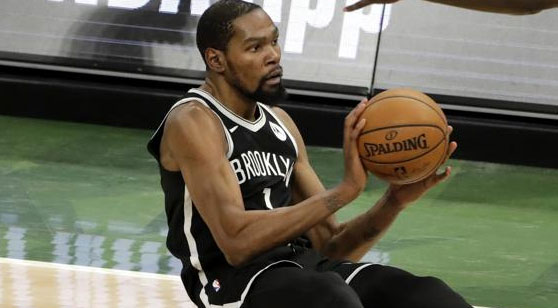 Kevin Durant and the Nets have lost the first three games on their road trip as they travel to Denver on Saturday. (AP)

Denver continues to impress despite losing Jamal Murray to a season-ending injury last month. Murray suffered a torn ACL against Golden State on April 12, but the Nuggets have kept playing well in his absence.

The Nuggets have won 10 of their last 12 games since Murray was injured, and they proved they can beat quality teams with their win over the Clippers in Los Angeles.

The Nuggets played very well in their 113-97 win over the New York Knicks on Wednesday night. Jokic had 32 points and 12 rebounds while making 10 of his 16 shots from the floor, and no player for the Knicks score more than 14 points. Michael Porter Jr. continued to shine to with 17 points and a plus/minus of +24.

Brooklyn has thrown in the towel when it comes to finishing first in the Eastern Conference during the regular season. The Nets seem likely to finish behind the surging Philadelphia 76ers and possibly the Milwaukee Bucks.

James Harden has missed over a month, and they are just looking to be healthy for the playoffs since Kevin Durant and Kyrie Irving have both missed a lot of time too.

The Nets have lost four straight games coming into Saturday night’s tilt with the Nuggets. Their back-to-back losses on the road to the Bucks on Sunday and Tuesday virtually ensured they wouldn’t clinch the top spot in the East, and that was despite some fireworks from Durant and Irving.

On Thursday night, the Nets fell to the Dallas Mavericks, 113-109 despite 45 points from Irving. Durant had an off night, going just 7-of-21 from the floor, and Landry Shamet was unable to score a single point in 24 minutes on the court.

The Nuggets were unable to beat the Nets in Brooklyn in their lone previous meeting this season. Durant was too much with 34 points, 13 assists, and nine rebounds while shooting 66.7% from the floor.

Irving sat out the game, but Denver had both Jokic and Murray on the floor. Jokic had seven steals in the loss.

Irving has been the leader for the Nets this year. He is the only one of the big three that will play more than half of Brooklyn’s games, and he has gotten it done on his own for stretches.

The All-Star guard is averaging 27.4 PPG and 6.3 APG, and Irving is also making 50.2% of his field goals and 39.0% of his threes. His ability to fill different roles depending on what Brooklyn needs from him on a given night has been very valuable.

The playoffs are only a couple weeks away and Durant is starting to come alive. Durant needed some time to find his groove after returning from an injury that sidelined him for two months. He has scored 32 points or more in four of his last six games, and he made 65.4% of his field goals and 61.3% of his threes in April.

Joe Harris is the only player to be on the floor for every game this season. Harris has been a nice role player alongside the Big Three with 14.2 PPG in 31.0 MPG. He has been extremely efficient with so many betting scoring options available, making 50.7% of his field goals and 47.8% of his threes.

Brooklyn has the best offense in the league statistically. The Nets lead the league in effective field goal percentage, shooting percentage, and shooting efficiency, which is pretty impressive considering Durant and Harden have missed half the season.

Jokic is currently a -2500 favorite to be named the NBA MVP. He has had a career year on his way to making the Nuggets a legitimate contender and leads the team in virtually every major category.

The hero of the Nuggets in Murray’s absence has been Porter. The former Missouri guard is averaging 18.8 PPG and 7.5 RPG this season, and he is making 54.3% of his field goals and 44.1% of his threes.

Porter had at least 20 points in 14 of his 16 games in April, highlighting how he has taken on a bigger role in this offense.

Trade deadline acquisition Aaron Gordon hasn’t had the impact Denver was looking for when the Nuggets brought him in from Orlando.

Gordon isn’t playing poorly, but he hasn’t been much of a difference maker with 10.0 PPG and 4.8 RPG. He is making a paltry 27.3% of his threes, so opponents aren’t respecting him beyond the arc.

The Nuggets have one of the most efficient offenses in the NBA thanks to Jokic. They rank in the top seven in scoring offense, shooting percentage, and shooting efficiency as the big man has great vision and thrives as a passer.

Denver might decide to rest some players since this is the second game of a back-to-back. However, Brooklyn seems ready to coast for the last week of the regular season, so the Nuggets are the pick.