Now that the play-in tournaments have concluded and the postseason bracket is finalized, the NBA Playoffs will officially kick off on Saturday with a jam-packed four-game slate of action on ESPN and ABC.

Denver enters Saturday’s contest as a one-point favorite over the visiting Trail Blazers, which is just the second time Portland has been listed as an underdog across its latest eight-game window.

The total for this event currently sits at OU 227.5 – marking the lowest over-under set for a matchup containing Portland game since squaring off against the Lakers back on May 7th (U 223). 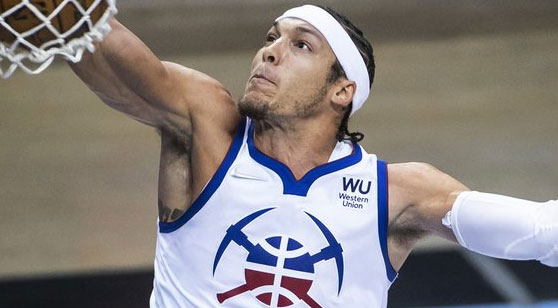 Aaron Gordon and the Nuggets took two of three meetings from the Trail Blazers this season. (AP)

The Trail Blazers closed out this year’s regular-season boasting wins in six of their last seven contests – with Portland’s only loss during that timeframe coming by a one-point differential in a matchup against the Suns.

On the flip side, the Nuggets picked up victories in three of four contests to wrap up their regular season campaign – with Denver’s only loss during that span coming in a matchup against the Trail Blazers, which was event head coach Michael Malone played his starters less than 20 minutes apiece.

The Nuggets claimed victories in two-of-three regular-season matchups against Portland – with both of Denver’s wins comfortably carrying ‘under’ results at an average of 214 points per game, and the Blazers’ lone win cashing ‘over’ tickets thanks to a 132-point offensive performance from Damian Lillard and company.

The first matchup between these teams on the year was quite the rollercoaster – considering Denver jumped out to a nine-point lead before the conclusion of the first quarter, and then had that lead completely erased before the start of the second half.

Denver came away with the win behind a phenomenal fourth-quarter performance from Jamal Murray though – as the now injured superstar racked up 19 points on 6-of-10 from the field during the final stanza of the contest to propel his team to victory.

The second affair between these teams ended up being the most exciting of three, as Portland’s Norman Powell hopped on a loose ball with less than five seconds remaining in the contest while trailing by one point – but his potential game-winning floater was just off the mark and Denver escaped with a narrow victory.

Portland bounced back with a double-digit victory in the most recent meeting between these teams though – as Denver’s starting lineup was on the floor for roughly 15 minutes during the meaningless loss.

After getting bounced from last year’s playoffs in a quick five games to kick off the Lakers’ dominant title run, Portland temporarily gained some revenge over the defending champs while wrapping up the regular season.

The Blazers picked up wins in six of their final seven regular-season contests, which forced the Lakers to participate in a first-round play-in matchup against the Warriors.

Portland leaned towards the high-scoring side of the spectrum over the course of this season – with the total cashing at 38-34 clip in matchups containing the Blazers on the year, which ranked fourth across the conference in that department.

The Blazers looked like a completely rejuvenated team at both ends of the floor during the final weeks of the regular season though – which kept the total 'under' in four of Portland’s last six affairs.

Despite the devastating knee injury Murray suffered back in mid-April, Denver kept the blinders on and plowed through the Western Conference standings during the second half of the regular season – claiming the third seed with a record of 47-25, and are now positioned for a winnable first-round series against the sixth-seeded Blazers.

Much of the resiliency Denver showed during the regular season can be attributed to Nikola Jokic emerging as the undisputed front-runner to take home this year’s MVP award.

The Joker finished up his campaign boasting averages of 26.4 points, 10.8 rebounds, and 8.3 assists per game on the year, while shooting nearly 57% from the floor and 40% from beyond the arc.

Michael Porter Jr. might not quite be the league’s MVP front-runner, but it still feels wrong to leave him out of this discussion after Denver’s final stretch of regular-season contests – considering the Missouri-product averaged 25 points per game across the last 10 outings that he received at least 25 minutes of action in.

Betting the ‘over’ in Nuggets’ games was also a relatively consistent play during the regular season – with the total cashing at a 39-33 mark in matchups containing Denver, which ranked third across the conference in that department.

That high-scoring trend seemed to be gaining a little momentum down the homestretch of the season too – considering the total has gone 'over' in four of Denver’s last six games.

After Murray suffered a knee injury that ended his campaign back in April, Porter Jr. slowly began assuming an expanded role in Denver’s offensive scheme – leading to 25-point performances in seven of his last 10 regular season outings (25+ minutes), while falling below 50% from the floor in just one of the affairs during that timeframe.

I’ll back Porter Jr. to keep up the scoring production here – as I worry about Denver’s chances in this series if Jokic’s supporting cast leaves him hanging against Dame and company.

The first two meetings between Denver and Portland this season were hard-fought defensive battles that contained a skimpy average of 214 points per game in them – resulting in a pair of narrow victories for the Nuggets.

The matchup between them that took place on the final day of the regular season resulted in a high-scoring win for Portland though – as the Blazers ended up running away with a double-digit victory in a contest Denver’s starters played roughly 15 minutes apiece in.

I’ll back these teams to stay 'under' 228 again here, as Portland and Denver failed to hit that number in two-of-three matchups during the regular season – and I don’t think scoring will get any easier in Saturday’s series opener.