Western Conference postseason action will resume on Monday night with Game 2 between the Nuggets and Blazers set to take place during the final matchup on TNT’s nationally televised slate.

Despite losing the first matchup in this series at home by a double-digit margin, Denver enters Monday’s contest as a 1.5-point favorite over the visiting Blazers – marking the third time Portland has been listed as an underdog across the last four games.

The total for this event currently sits at OU 227.5 – after these teams easily cruised an ‘over’ result against a similar mark in Saturday night’s series opener (O 226). 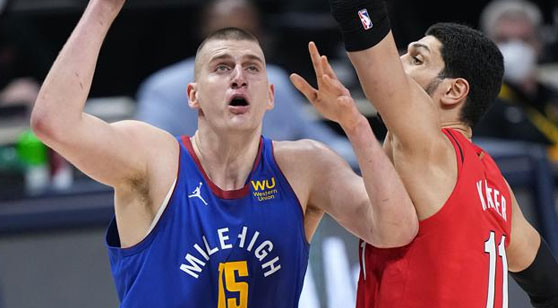 Nikola Jokic and the Nuggets look to rebound from a Game 1 loss as they face off with the Blazers on Monday. (AP)

The Trail Blazers closed out this year’s regular-season boasting wins in six of their last seven contests – with Portland’s only loss during that timeframe coming by a one-point differential in a matchup against the Suns.

On the flip side, the Nuggets picked up victories in three-of-four contests to wrap up their regular season campaign – with Denver’s only loss during that stretch coming in a matchup against the Trail Blazers, which was event head coach Michael Malone played his starters roughly 15 minutes apiece.

The Nuggets and Blazers kicked off their postseason journeys with an exciting back-and-forth affair in Saturday’s first-round series opener as Nikola Jokic and Damian Lillard went toe-to-toe with 34 points apiece over the course of the matchup.

The Blazers’ supporting cast came to the rescue in the form of Carmelo Anthony and Jusuf Nurkic down the stretch though, as the duo teamed up to match Dame’s 34 points at a combined 59% clip in the contest – which appeared to make the difference during Portland’s double-digit upset-victory in the first game of this series.

The Nuggets claimed victories in two-of-three regular-season matchups against Portland – with both of Denver’s wins comfortably carrying ‘under’ results at an average of 214 points per game, and the Blazers’ lone win cashing ‘over’ tickets thanks to a 132-point offensive performance from Lillard and company.

Their first meeting on the year was quite the rollercoaster as Denver jumped out to a nine-point lead before the conclusion of the first quarter, and then had that lead completely erased before the start of the second half.

The Nuggets rallied back behind Jamal Murray’s phenomenal late-game shooting performance though – as Denver’s secondary superstar stole the steering wheel from Jokic on offense towards the end of that contest, and racked up 19 fourth-quarter points on 60% from the field to seal his team’s first victory over Portland this year.

The second matchup between these teams ended up being the most exciting of three during the regular season.

Portland’s Norman Powell hopped on a loose ball with five seconds remaining in the fourth quarter while trailing by a possession, but his potential game-winning floater was just off the mark and Denver managed to escape with a one-point victory.

Portland bounced back with a double-digit victory in the final regular-season meeting between these teams though – as Denver’s starting lineup was on the floor for roughly 15 minutes during the meaningless loss.

After getting bounced from last year’s postseason in a quick five games to kick off the Lakers’ dominant title run, Portland has returned to the first-round of the playoffs with vengeance by claiming a statement-win during Saturday’s series opener against the third-seeded Nuggets.

There is still plenty of basketball left to be played in this set. Portland proved that its prior success wasn’t just a “regular season thing” in that matchup though – and the Nuggets may have a tougher battle than they thought on-tap here, especially without Murray on the floor.

The Blazers leaned towards the high-scoring side of the spectrum during the regular season – with the total finishing up at 38-34 clip in matchups containing Portland, which ranked fourth across the conference in that department.

Portland looked like a completely rejuvenated team at both ends of the floor down the homestretch though – which kept the total below the number in four-of-six matchups to close out the Blazers’ regular-season campaign.

Saturday’s series opener against Denver probably would have stayed under the total too if the Blazers put forth a typical shooting effort from beyond the arc.

Portland ended up knocking down 19 three-pointers at a 48% in that contest though – resulting in a 123-point offensive performance that cashed ‘over’ tickets by a few baskets (O 226).

Despite the devastating knee injury Murray suffered back in mid-April, Denver kept the blinders on and plowed through the Western Conference standings during the second half of the regular season – claiming the third seed with a record of 47-25, which has slated them for a favorable first-round matchup against Portland.

Denver was rudely awakened during Saturday’s postseason opener though, as the Trail Blazers went off for 123 points behind an impressive 19-of-40 long-range effort in the contest – resulting in a rare double-digit victory for an underdog in Ball Arena.

Betting the ‘over’ in Nuggets’ games was a profitable trend to follow during the regular season, with the total finishing up at a 39-33 mark in matchups containing Denver – ranking third across the conference in that department.

That high-scoring trend seems to be carrying momentum into the postseason too – considering the total has gone 'over' in five of Denver’s last seven games, which includes an ‘over’ result against Portland in Game 1.

Despite falling to Portland by double-digits, Jokic continued to demonstrate why he is the overwhelming favorite to take home this year’s MVP award in Denver’s matchup against the Blazers this past Saturday – with the big man posting 34 points on 14-of-27 from the field over the course of the Nuggets’ ugly loss.

Jokic’s stellar performance during Denver’s postseason opener now gives the presumable MVP-winner 30-point performances in five of his last seven outings (29+ mins), with his two ‘under’ results across that span still coming at lofty marks of 24 and 29 points.

I’ll back the Joker to have another big night on the scoreboard here, as I think Denver is actually going to need a little bit more from the big man to get past Portland in this series – and he is more than capable of giving more.

Despite Portland knocking down 19 three-pointers at a 48% clip in Saturday’s series opener, the Nuggets still managed to stay competitive for most of their double-digit loss in Game 1 – even building a sizable second-half lead during what will probably end up being the Blazers’ best offensive performance of this series.

I’ll back Denver to bounce back here, as I doubt Portland will keep up such a level of efficiency from beyond the arc throughout this series – and even if they do, I still give the Joker and company a puncher’s chance in Monday’s pivotal Game 2 matchup.