The Denver Nuggets and Portland Trail Blazers head to Portland with their best-of-seven series knotted up at one game apiece.

The two Northwest division rivals split a pair of high-scoring contests at Ball Arena in Denver as the winner of Game 3 on Thursday will own a 2-1 series edge. 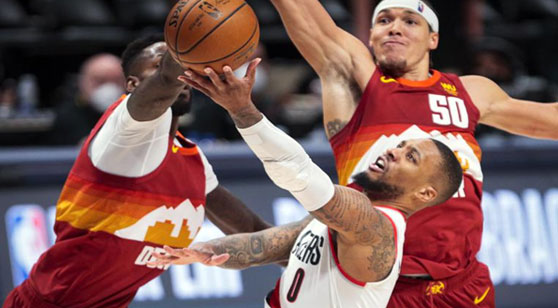 The Blazers return home on Thursday night looking for a 2-1 series lead over the Nuggets. (AP)

Portland grabbed the upper-hand in this series with a 123-109 triumph in Game 1, marking the third consecutive season that the Blazers won their playoff series opener.

The Blazers overcame a three-point halftime deficit by outscoring the Nuggets, 38-25 in the third quarter to pull away. Damian Lillard paced Portland with 34 points and 13 assists, while former Nugget Carmelo Anthony scored 18 points off the bench.

Denver bounced back in Game 2 by posting a 73-point first half in a 128-109 rout of Portland as two-point home favorites.

MVP favorite Nikola Jokic shot an efficient 15-of-20 from the field for 38 points to lead Denver, while Lillard heated up in the second quarter and put up 42 points in the loss.

The Blazers shot 16-of-33 from three-point range, including Lillard drilling nine treys in Game 2, but five Nuggets besides Jokic scored in double-figures, including Michael Porter, Jr. scoring 18 points in the win.

The Nuggets were up and down in the role of a road underdog this season by posting a 4-6 SU/ATS record, which included wins at Milwaukee, Phoenix, and the L.A. Clippers.

Denver has been a solid Under team away from Ball Arena recently by putting up a 15-4 mark to the Under in the last 19 away contests.

The Blazers suffered through a six-game losing streak at the Moda Center to close out April, but Portland has won its last four home contests.

However, Portland is in the midst of a 4-9 ATS slump in its last 13 games as a home favorite, including a 2-7 ATS mark as a favorite of six points or less.

Denver picked up a key win in Game 2 to avoid falling down 0-2 heading to Portland. Although the first two contests of this series have been decided by double-digits, look for Game 3 to be a closer, lower-scoring battle.