Is this how it ends for the Los Angeles Lakers? The defending champions are now tied 2-2 with the Phoenix Suns in their first round series after Sunday night’s loss in Game 4.

Star forward Anthony Davis is unlikely to play in Game 5 and may not be available for the rest of the series due to a strained groin.

For the Lakers to advance, LeBron James will have to carry this team past the Suns. James was able to do that in Cleveland for years, but is he still capable of those heroics now that he’s 36 years old? 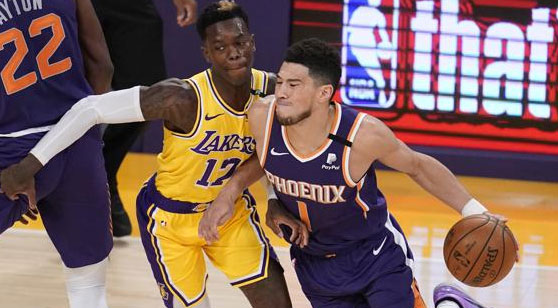 Devin Booker and the Suns seek a 3-2 series lead over the Lakers with a win at home on Tuesday night. (AP)

Phoenix got off to a strong start in Game 1. The Suns beat the Lakers 99-90 in their first series as neither Davis nor James had a good outing.

Devin Booker had a strong all-around game with 34 points, seven rebounds, and eight assists, and Deandre Ayton had 21 points and 16 rebounds.

The Lakers bounced back in Game 2 as Davis took over in the low post. He got to the line 21 times and posted 34 points and 10 rebounds in a 109-102 win. Dennis Schroder had a nice night with 24 points to be LA’s second leading scorer.

Davis dominated once again in Game 3, leading the Lakers to a 109-95 victory. He had 34 points and 11 rebounds, and six of those rebounds were offensive boards. Booker and the rest of the Suns’ starters besides Ayton had off nights.

Los Angeles was hoping to take a commanding 3-1 lead on Sunday night, but Phoenix had other ideas. Although Booker didn’t shoot well, the Suns played great defense and held the Lakers to a 39.5% shooting percentage.

James was the only Lakers player that performed well in Game 4. He registered another double-double with 25 points and 12 rebounds, but his six turnovers showed that he was trying to do a little too much.

Davis was 2-for-9 from the floor, but he left at halftime because of the groin strain. Schroder and Kyle Kuzma really struggled to provide James with help combining to go 7-of-24 in the game, and the second leading scorer was Marc Gasol with 12 points.

Although Davis is listed as questionable, the Lakers are reportedly skeptical about his chances of playing in Game 5 according to ESPN's Adrian Wojnarowski. Davis has dealt with knee and Achilles’ injuries this year, and the accumulation of those injuries has taken its toll on the rest of his body.

The Lakers need an unsung hero to emerge in Game 5. Even if Davis does play, he is likely to be limited, and James can’t do it all on his own.

James is still one of the NBA’s elite talents. Although he might not have the same athleticism he did a few years ago, he is playing at a high level. He is averaging 21.8 PPG, 7.3 RPG, and 8.5 APG this postseason.

While he is making 49.3% of his shots, other stats show that he has fallen off a little bit. James is making just 32.1% of his threes and 58.8% of his free throws. Additionally, he isn’t getting to the line as much and is turning the ball over almost five times a game.

Schroder shot 50% or better from the floor in each of his first three games before an off night on Sunday. Schroder was brought in to provide some scoring in the backcourt this offseason, and the Lakers really need a solid performance from him in Game 5.

There hasn’t been much production from the guards this series. Alex Caruso and Kentavious Caldwell-Pope have combined to score 11.0 PPG despite the two players teaming up to play 53.3 MPG.

After a strong first game, Booker has had a hard time hitting his shots. Booker has made just 36% of his field goals over the last three games. He is 2-of-12 from beyond the arc in those games, so the Suns need him to be more efficient.

Fortunately, Booker has been able to get to the line with 9.3 free throw attempts per game.

Chris Paul hasn’t had as much success as he did during the regular season. Paul is averaging just 8.5 PPG and shooting 41.7% from the floor.

He is still doing a good job running this offense with 7.0 APG and a 4.7 assist-to-turnover ratio though. Additionally, his presence takes some of the pressure off Booker.

There were fears of Ayton’s production tailing off against the Lakers’ big men in this series. However, Ayton has continued to be a weapon on offense with 19.8 PPG and 13.5 RPG.

The former top pick is averaging four offensive rebounds a night and making 80.2% of his shots, and he could have a huge night on Tuesday if Davis is out.

Cameron Payne and Mikal Bridges are the other two players to watch for the Suns. Payne and Bridges have been the best perimeter shooters on Phoenix, and Payne is hitting 42.1% of his threes, while Bridges is hitting 42.9% from downtown.

On the other end of the spectrum, Jae Crowder is ice cold from beyond the arc at 17.9%.

If this was five years ago, James could will his team to a victory here. However, James is no longer is in his early 30s, and he doesn’t have a great supporting cast without Davis available.

That will lead to a Phoenix win and Los Angeles needing to avoid elimination on Thursday.