Last season, the Lakers defeated the Nuggets in the Western Conference Finals and it looked like there would be a rematch in the second round of these playoffs.

Following Anthony Davis' injury, the Lakers were toast and the Suns took care of the defending champions in six games to advance to the conference semifinals for the first time since 2010. 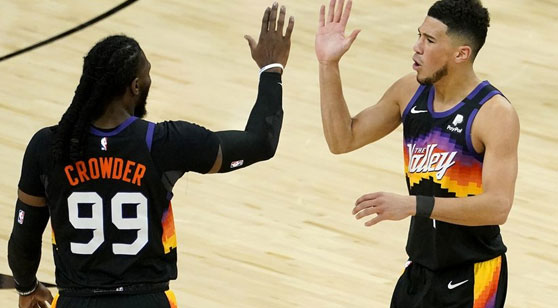 The Suns welcome in the Nuggets on Monday night to begin their second round series in Phoenix. (AP)

Denver is back in the conference semifinals for the third consecutive season, coming off a six-game series victory over Portland in the opening round.

Last season's playoff hero Jamal Murray has been watching from the sidelines since tearing his ACL on April 12 at Golden State. MVP favorite Nikola Jokic has carried the load for Denver by averaging 26.4 ppg, 10.8 rpg, and 8.3 apg, while scoring 33 ppg in the first round.

The Nuggets lost the series opener to the Trail Blazers before winning the next two games. After Portland evened the series at 2-2, Denver came away with a thrilling 147-140 double-overtime home win, followed by erasing a double-digit deficit to capture Game 6 on the road to advance.

Without Murray, the Nuggets relied on Michael Porter, Jr. and Monte Morris to help them past Damian Lillard and Portland. Porter, Jr. averaged 18.8 ppg, while Morris put up 15.3 ppg in the series victory.

The Suns made waves in the NBA bubble last season by being the only team to finish with a perfect 8-0 mark in the final eight regular season games.

The addition of All-Star point guard Chris Paul to a roster with young stars Devin Booker and Deandre Ayton proved to the final piece to getting Phoenix over the hump and ultimately the second seed in the Western Conference.

The Suns slayed the beast in the first round by knocking out LeBron James and the Lakers in six games. Yes, the champs were without AD for three games (he played a few minutes in Game 6), but Phoenix deserves credit by limiting L.A. to 100 points or less in four games.

Booker reached next-level status with two huge performances in Games 5 and 6, capped off by a 47-point output in the series clincher at Staples Center, which included hitting 8-of-10 attempts from three-point range.

Things were different nearly four months ago when these teams hooked three times and the road squad won each matchup.

Murray played in all three games for the Nuggets prior to his knee injury and averaged 25 ppg, including scoring 31 points in the 106-103 home defeat on New Year's Night at Ball Arena. Both Booker and Ayton posted 22 points apiece in the win for Phoenix as 3.5-point underdogs.

In the back-to-back games in Phoenix, the Nuggets grabbed a pair of overtime wins, starting with a 130-126 triumph as one-point 'dogs. Denver erased a 14-point halftime deficit, led by Jokic's 31 points.

On the second end, Booker sat out due to injury, but 'over' bettors lucked out as the game went to not one, but two overtimes as Denver prevailed, 120-112.

The game finished regulation, 98-98, as Murray drilled a three-pointer to force overtime. The contest was on a nice 'over' pace, but a 31-point third quarter derailed those hopes until the extra 10 minutes past regulation was enough for an 'over.'

The Nuggets have compiled a 6-7 ATS record this season in the role of an underdog, but went 2-1 ATS as a 'dog in the first round against Portland.

Denver closed the regular season on a 14-4 'under' run on the road, but hit the 'over' in two of the three games in Portland, while allowing exactly 115 points in each contest at Moda Center.

The Suns have covered 14 of the last 19 games as a single-digit home favorite, while winning 16 of those contests straight-up.

The last time Phoenix lost outright as a single-digit home favorite came against Indiana on March 13.

Phoenix took care of business in the first round against Los Angeles, but the thought is still out there of how would the Lakers have fared with a healthy squad.

The Nuggets have won three of their last four playoff series and even without Murray, Jokic has shown he's unstoppable and the role players have stepped up.