Western Conference second-round action will resume on Tuesday night with Game 1 between the Clippers and Jazz set to wrap up TNT’s nationally televised double-header in Salt Lake City, Utah.

So, VI is getting you ready with a variety of betting resources to help handicap both critical matchups.

After eliminating Memphis in a quick five-game set, the Jazz enter their second-round series opener as a 3.5-point favorite over the visiting Clippers – marking the first time Kawhi Leonard and company have been listed as an underdog this postseason.

The total for Tuesday’s event is currently stationed at OU 220.5 – which is a little higher than the average over-under set across L.A.’s first-round series (OU 216), and a little lower than the one set during Utah’s (OU 223). 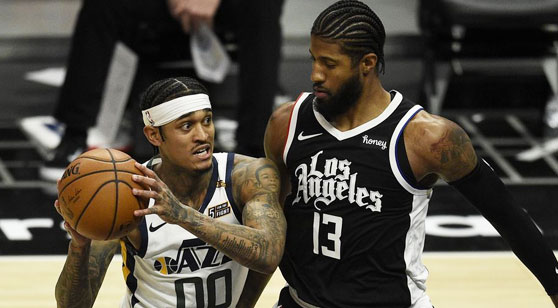 The Jazz captured two of three meetings from the Clippers this season as they meet in Game 1 on Tuesday. (AP)

After dropping their postseason opener against Memphis by a bucket without Donovan Mitchell on the floor, the top-seeded Jazz cruised to four straight wins over the Grizzlies following the two-time All-Star’s return to the lineup in Game 2 – completing the gentleman’s sweep by an average of 11 points per game across those victories.

The Clippers, on the other hand, needed a little more time to solidify a victory in the opening round – and rightfully so, considering Los Angeles drew Luka Doncic and the pesky Mavericks to start the postseason, which required all seven games to determine a winner.

The Jazz won two of three regular-season matchups against the Clippers on the year – with Utah’s pair of victories both staying 'under' due to an average of just 208 points being scored across them, and L.A.’s lone victory going over thanks to these teams combining for 228 points in the event (116-112).

The first matchup between these teams took place on New Year’s Day and resulted in a six-point home victory for the Jazz – as Utah hung in as long as they could during the back-and-forth battle, but Mitchell ended up shooting them out of a win with his dismal performance from the field (15 points, 6-14 FG).

The following two meetings occurred just one day apart back in February and resulted in a 1-1 split – as Leonard and Paul George both sat out during Utah’s 18-point win on the front half of the set, and L.A. managed to escape with a four-point win at full-strength on the back half.

The Clippers caught a break on their two-game road trip to Dallas though – as Doncic told media he was experiencing a significant amount of neck pain during his team’s loss in Game 3, which appeared to continue bothering him for the rest of the series.

Luckily though, Phoenix struggled along with them down the stretch and the Jazz managed to claim the Western Conference throne by a narrow one-game margin – earning them a five-game cakewalk against Memphis to kick off their postseason campaign.

After averaging 27 points on 40% shooting across his first two games back from an extensive period of absence, Mitchell kicked his offensive production into high gear ahead of Games 4 and 5 in the opening round – as the 24-year-old Louisville product posted back-to-back 30-point performances on 50% from the floor across Utah’s final two victories over Memphis.

It’s far from a lock – but let’s see if we can beat Vegas to the punch in this second-round series opener and back Mitchell to erupt here, as the superstar led last year’s postseason in scoring at 37.6 points per game – which was a short run highlighted by 40-point outings in three of seven matchups during Utah’s heartbreaking loss to Denver in last year’s opening round.

Despite Utah finishing the regular season with the best record in the entire league (52-20), many seem to be falling victim to the idea that the Clippers are the team with a higher ceiling ahead of this second round series – which is mostly due to the pair of Finals’ MVP trophies stored in Kawhi’s closet.

That may be true – but the Clippers really struggled to get by Dallas in the first round, and Dallas isn’t nearly as talented, deep, or experienced as the Jazz.

I’ll lay the points with Utah at home here – as the Jazz are also the far more rested team heading into this matchup, and I need to see Kawhi start consistently receiving more help from his supporting cast before I hop back on the Clippers’ bandwagon.