NBA postseason action will resume on Wednesday night with the Hawks and Bucks set to square off Game 1 of the Eastern Conference Finals at 8:30 Eastern time on TNT.

After stunning Brooklyn with a gutsy overtime victory in Game 7 at the Barclays Center, Milwaukee heads into Game 1 of the Eastern Conference Finals as a 7.5-point favorite over the visiting Hawks – which is roughly the same line set as Atlanta’s four road matchups against Philadelphia in the previous round.

The total for Wednesday’s event is currently stationed at OU 226.5 – which ties the highest mark set for a matchup containing Atlanta this postseason (U 226.5, Game 4 vs PHI). 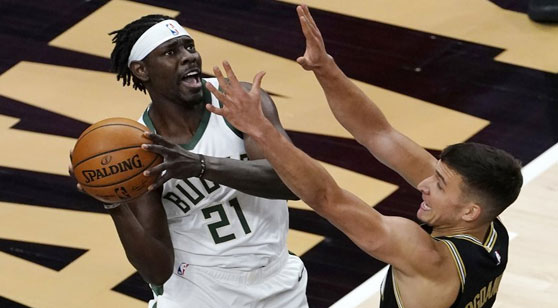 Jrue Holiday and the Bucks captured two of three regular season meetings from the Hawks. (AP)

After a pair of grueling seven-game battles against higher-seeded opponents in the conference semis’, Milwaukee and Atlanta eventually emerged from their respective series as the final contenders standing in the Eastern playoff bracket – which came as a painful surprise to most future bettors backing teams on that side of the map.

Atlanta got to this point by knocking off the top-seeded Sixers, as Trae Young (21 points, 5-of-23 FGA) gravely struggled throughout the Hawks’ second-round finale in Philadelphia, but his supporting cast stepped up and carried him for once in the winner-take-all event – adding 82 points on 53% shooting to Atlanta’s remarkable victory in Game 7.

Milwaukee, on the other hand, took down the heavily favored Nets in a brutal seven-game second-round matchup – which was a series Milwaukee fell all the way down to a +375 underdog after getting stomped on the road in Games 1 and 2.

The Bucks won two of three matchups against the Hawks during the regular season – with Milwaukee’s pair of victories easily cruising over the number set for Wednesday’s opener (236.5 PPG), and Atlanta’s lone victory staying under that mark (215 points).

Make note though, Young did not participate in two of those affairs.

The matchup Trae was present for resulted in a double-digit victory for the Bucks, as Atlanta’s primary scoring threat posted dismal numbers from the field in his lone regular-season outing against Milwaukee – tallying just 15 points on 3-of-17 from the field during the loss.

Atlanta played the following three matchups with a chip on its shoulder though, as the Hawks stomped New York by an average of 14 points the rest of the way – which included a dominant series-ending victory at MSG in Game 5 (103-89).

The Hawks carried that same momentum into the following series against Philadelphia too – as they stunned the top-seeded Sixers in a wild seven-game rollercoaster to close out the second round.

After entering Game 3 of the second round staring down the barrel of a sweep, the Bucks (-140) managed to emerge from its two-game home set as the slight favorite in their series before Game 5 – which was mainly due to the uncertainty regarding Kyrie Irving and James Harden’s injuries.

Following Harden’s return in Game 5, the Milwaukee’s series price fell all the way back down to +180 – despite still standing as a heavy favorite at home in Game 6 (-220).

After knocking off Brooklyn on the road in a Game 7 thriller though, the Bucks (+105) now hoist the league-wide crown as the undisputed favorites to take home the NBA title.

After averaging 29 points on 39% from the field in the presence of this year’s DPOY runner-up (Ben Simmons), Young will finally be able to breathe at the offensive end in Atlanta’s ECF matchup against Milwaukee.

I’ll back Trae to score at least 30 here – as Jrue Holiday and Khris Middleton are still outstanding wing-defenders capable of holding him in check, but getting rid of Simmons should feel like a significant weight off his shoulders heading into Wednesday’s Game 1.

Despite eliminating Philadelphia with a gutsy road victory to close their previous series, the Hawks head into Game 1 of the Eastern Conference Finals as a 7.5-point underdog against the Bucks at Fiserv Forum.

I’ll take the points with the Hawks here – as I think Young and company will at least give Milwaukee a run for its money on the road in Wednesday’s series opener.