The NBA Finals will resume at Fiserv Forum this Sunday night with the Suns and Bucks set to square off for Game 3 at eight o’clock Eastern time on ABC.

After dropping Games 1 and 2 by double-digits in the Valley, the Bucks travel back to Wisconsin for their third NBA Finals’ matchup as a four-point favorite over the visiting Suns – marking the first time Phoenix has been an underdog in this series.

The total for Sunday’s event has risen to OU 222 – thanks to the first two matchups of this series going over with an average of 224.5 points being scored in them.

This year’s playoffs have been completely ravaged by injuries, and Milwaukee and Phoenix are no exception to that claim – considering Chris Paul previously dealt with a shoulder issue and Covid-19, Devin Booker was forced to wear a protective mask after getting head butted, and Giannis Antetokounmpo is still somewhat recovering from a hyperextended left knee.

The Suns have also greatly benefited at the disposal of opposing injury concerns throughout their postseason journey – as Phoenix sped past the Lakers, Nuggets, and Clippers in a quick 16 games (12-4), which assumably would’ve taken longer if Anthony Davis, Jamal Murray, or Kawhi Leonard were healthy for those series.

Milwaukee’s path, on the other hand, wasn’t laid out quite so conveniently, considering the Bucks were required to go through Miami, Brooklyn, and Atlanta on the way to this year’s NBA Finals – nonetheless, requiring just one more game than Phoenix to raise their respective conference banner thanks to the Nets hanging around for seven contests (12-5).

After their exhausting Eastern Conference title run though, the Bucks finally ran into a buzzsaw in the NBA Finals – as Phoenix posted a pair of commanding double-digit victories at home to kick off this series, which has landed Antetokounmpo and company in a desperate situation ahead of Sunday’s third matchup. 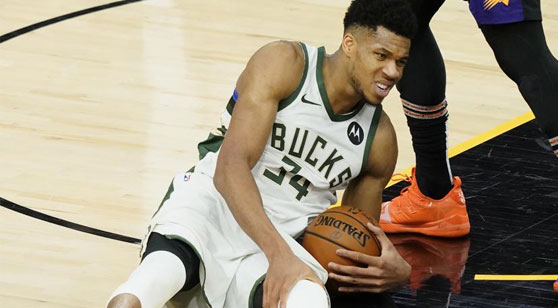 Giannis Antetokounmpo and the Bucks have fallen into a 2-0 hole against the Suns as they return home for Game 3. (AP)

The Suns picked up two thrilling victories against Milwaukee during the regular season, as both non-playoff matchups between these teams were decided by a narrow one-point margin – with the second of those affairs getting settled in overtime.

Prior results should always be taken with a grain of salt, but six straight meetings between Milwaukee and Phoenix have gone 'over' the total set for Sunday’s matchup (OU 222) – with Games 1 and 2 of this year’s NBA Finals having 224.5 points per game scored across them, and their previous four regular-season bouts containing an average of 253 points scored in them.

Although Phoenix (+250) posted just two losses on the way to this year’s Western Conference Finals, the Nets (+220) still went into their ECF finale against Milwaukee (+450) slightly favored to take home the 2021 NBA title.

After their thrilling Game 7 victory over Brooklyn though, the Bucks (+110) immediately leapfrogged Phoenix (+150) as this year’s stand-alone title favorite – with the Clippers (+900) and Hawks (+1100) bringing up the rear as distant underdogs.

Shortly after that, the Suns dominated in back-to-back contests to open the Western Conference Finals – eventually landing Phoenix and Milwaukee as co-favorites to win it all at +110. Phoenix (-185) finally emerged as the stand-alone title favorite after Antetokounmpo’s latest injury though – and after thumping the Bucks by double-digits at home in Games 1 and 2, that price has skyrocketed all the way up to -500 ahead of Sunday’s third event in Milwaukee.

Despite venturing down a long, bumpy road to the NBA Finals, the Bucks still managed to dodge the dreaded injury bug for most of their postseason campaign – considering the only player listed on Milwaukee’s injury report heading into the ECF was Donte DiVincenzo, who received ankle surgery over a month ago.

Milwaukee’s worst nightmare became a bleak reality against Atlanta though, as Antetokounmpo got tangled up with Hawks' center Clint Capela on a lob attempt and suffered a knee injury in the second half of Game 4 – sidelining the former MVP for the final two matchups of the ECF, which also left his status in jeopardy for Game 1 against Phoenix.

Giannis ended up starting the Finals with what appeared to be some sort of offensive restriction in place – but in Game 2, Antetokounmpo looked back to his typical self as Milwaukee’s superstar scored 42 points on 68% from the field during the second event.

It wasn’t quite enough to pick up a win though – as Khris Middleton and Jrue Holiday paved the way to Milwaukee’s double-digit loss by combining for just 28 points on 12-of-37 (32%) shooting in Game 2 this past Thursday.

After scoring 29 points on 46% shooting against Phoenix in Game 1, Middleton went ice cold from the floor in this past Thursday’s matchup – as he put up just 11 points on 5-of-16 shooting during his team’s second double-digit loss of this series.

I’ll take Middleton to bounce back here though – as Milwaukee desperately needs an adequate amount of offensive production from him to keep this series somewhat competitive.

Despite dropping the first two matchups of this series by double-digits in Phoenix, the Bucks travel back to Milwaukee for Game 3 of the NBA Finals as a four-point favorite over the visiting Suns – marking the first time Phoenix has been an underdog in this series.

I’ll lay the points with Milwaukee here though, as the Bucks have posted a 7-1 record at Fiserv Forum this postseason, compared to their 5-6 tally on the road – while claiming all but two of those home playoff wins by five points or more.