The second evening of regular season NBA action will wrap things up with a Western Conference Semifinal rematch between the Denver Nuggets and Phoenix Suns. Coverage begins at 10:10 p.m. ET on ESPN.

After getting swept by the Suns in the second round of the playoffs, the league gifted Denver with a shining opportunity at temporary redemption to start the year – as Nikola Jokic and the Nuggets will make the trek back to Phoenix for both these squads’ first matchup of the new year.

Denver never stood much of a chance against Phoenix in last year’s conference semi-finals, considering the Nuggets were playing without All-Star guard Jamal Murray (knee) – and clearly, head coach Michael Malone needs all-hands-on-deck when squaring off against top-tier squads like the Suns.

Murray is expected to return at some point this year – but unfortunately, he’s still yet to be cleared, so Denver will be forced to seek revenge without one of its superstars.

On the flip side, the Suns head into the new season boasting incredibly lofty expectations, considering Phoenix finished just one game behind Utah for the top seed in the West last year – which led to Devin Booker and company barreling all the way to the Finals.

Phoenix is unquestionably the more talented team in Wednesday night’s matchup, especially considering the Nuggets will still be without Murray to start the new season – but for some reason, I still think this matchup is going to wind up incredibly close.

I’ll take the points with Denver here, as I slightly doubt the Nuggets will travel to Phoenix and emphatically take down the Suns to tip off the new season – but I still expect them to keep things close throughout Wednesday’s highly anticipated playoff rematch.

After losing Murray to a knee injury in the heat of last year’s regular season, expectations regarding Denver quickly plummeted – as the Nuggets (-120) ventured into their first-round playoff series narrowly favored over the lower-seeded Blazers (+100).

Once Murray returns, Denver appears fully capable of contending against all the top teams in the West – and we should eventually see them receive that respect from the oddsmakers when they officially reach full strength.

Until they get healthy though, stay on the lookout for spots where Denver may not be receiving the appropriate amount of respect from the books – as they still beat Portland without Murray, and I expect them to keep things close against Phoenix on opening night.

The Suns and Jazz fiercely battled for the top seed in the West all the way through the final evening of the regular season – as whichever team wound up with the second seed would eventually draw a first- round playoff matchup against the Lakers.

Phoenix ended up falling one game short of the regular-season crown – but honestly, things didn’t shake out so poorly for them, considering the Suns’ postseason journey consisted of three incredibly banged- up squads before losing to the Bucks in the Finals. 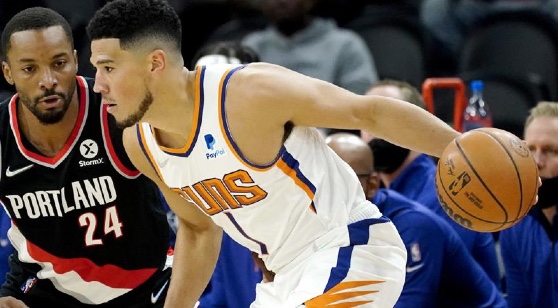 The latest matchup between Denver and Phoenix was actually the last time we saw the Nuggets – as the Suns traveled to Ball Arena for Game 4 of the Western Conference semis’ and ended up cracking out the brooms against the home team.

During last year’s regular-season though, Denver posted a 2-0 road record against the Suns – but both of those victories came with Murray in the lineup.

After getting swept by Phoenix in the second round of last year’s playoffs, the Nuggets will travel back to Arizona for their first matchup of the new season as six-point underdogs against the Suns at the Footprint Center.

I’ll take the points with Denver here, as Phoenix still clearly stands as the superior team in Wednesday’s matchup – but Jokic should still post big numbers and help keep things close, which is why I’m also taking the reigning MVP’s points over in Wednesday night’s affair.