Nationally televised NBA coverage will resume on Wednesday night with a heavyweight Eastern Conference bout between the Brooklyn Nets and Boston Celtics. Coverage begins at 7:30 E.T. on ESPN.

After finishing seventh in the East with a record of 36-36 last year, Boston stumbled out to a surprisingly shaky start to the new season, as the Celtics opened with losses in five of seven games – with their only victories across that span coming against relatively pedestrian opponents in the Rockets and Hornets.

The Celtics have played solid basketball since their lackluster 2-5 start though, considering Boston enters Wednesday’s contest following wins in six of the last eight games – which includes tough victories over the Bucks, Lakers, and Raptors.

On the other hand, Brooklyn stumbled out to a similarly slow start to the new season, as the Nets kicked things off with losses in three of their first five games – despite being favored by a generous margin in two of those defeats.

The Nets quickly turned things around following their disappointing start though, considering Brooklyn enters Wednesday’s contest boasting wins in 11 of the last 13 games – with six of those victories coming by nine points or more.

I’ll take Boston at home here, as despite the Nets winning three of their last four games, Brooklyn has averaged just 110 PPG on 44.2% FG across that same window – which likely won’t be enough juice to take down the Celtics at TD Garden.

After sputtering out of the gate to start the season, the Nets quickly found their rhythm during the back-half of October – highlighted by Brooklyn now entering Wednesday’s event riding a sturdy 11-2 SU run.

Brooklyn ranks just 10th in the league in overall scoring (108.8 PPG), but don’t be fooled by that somewhat pedestrian number – the Nets are still one of the league’s most efficient bunches offensively, as they currently rank 3rd in both true shooting and effective field-goal percentage (114.7% TS, 54.1 % EFG).

After making a quick exit from last year’s playoffs, the Celtics’ slow start was undeniably frustrating, as Boston dropped five of seven games to open the new season – despite being favored in five of those matchups.

The Celtics are seemingly back on track though, considering Boston heads into Wednesday’s matchup following wins in eight of the last 11 games – with six of those victories coming by nine points or more. 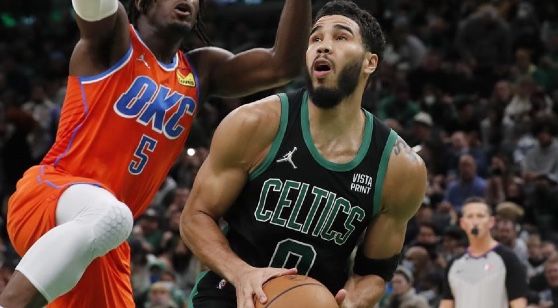 The Celtics were swept by the Nets in the three regular-season meetings in 2020-21. (AP)

Brooklyn swept a three-game regular-season set against the Celtics last season, but those results should be taken rather lightly, considering Kyrie Irving participated and led the Nets in scoring across last year’s set (30.7 PPG) – and Irving will remain unavailable for Wednesday’s event.

With both teams currently riding a three-game winning streak, Wednesday night’s primetime showdown between the Nets and Celtics is listed as a 50-50 pick’em – marking the first matchup Brooklyn didn’t open as a favorite in since visiting the Bucks on opening night.

I’ll take Boston here, as Boston is the far better defensive squad in this matchup, as the Celtics rank 7th in defensive efficiency and 6th in opponent floor percentage (1.02 DE, 46.3% FG) – and the far more battle-tested squad, having already matched up with the Bulls, Heat, Mavericks, Hawks, Bucks, and Lakers in the month of November.