The NFL MVP betting market always garners plenty of discussion every summer, as excitement for the upcoming NFL season starts to hit a fever pitch every August.

It's an award that's directly correlated with some of the team futures markets (win division, conference, Super Bowl) and more often than not it's a 32-man race entering the season as QB's have won the MVP award 17 out of the last 20 times dating back to the realignment season of 2002 (Peyton Manning and Steve McNair shared the honor in 2003).

Eight straight QB's have won this award coming into the 2021 campaign, and only one player – Manning - in that span has won the award in consecutive seasons and he accomplished that feat on two different occasions (2003-04 and 2008-09).

That's not exactly the best information to become aware of for those bettors backing Green Bay QB Aaron Rodgers (+1000) to go back-to-back as the Most Valuable Player in the NFL, even as he embarks on his 2021 “FU to management Tour” before the next steps of his career get sorted out in the upcoming offseason.

As the 2nd favorite behind Patrick Mahomes (+500) in the NFL MVP betting market, backing Rodgers to do something only one other guy has done the past 20 years is hard to pull the trigger on.

However, that's not the only historical pattern that NFL MVP bettors could potentially use from the last 19 NFL seasons to help them narrow down the potential choices for this year's eventual winner.

And as you start to go through all the previous patterns of past winners and apply them to the 2021 market, the potential choices really dry up if you're interested in playing the percentages, so let's work through this all together. Remember, we've already got to work with the fact that 17 of the last 20 MVP's have been QB's, with the other three being RB's.

#1: No NFL MVP has gone on to win the Super Bowl in his MVP season

This is a trend that's produced some wild results to stand the test of time, as Tom Brady's 2007 award came during New England's perfect regular season, as well as two former winners who went 15-1 SU in their respective MVP seasons (Rodgers in 2011, Cam Newton in 2015) falling short of the sport's ultimate prize.

So team wins and a strong season might be highly correlated to the MVP winner, but you want a player on a team that's likely going to be good but ultimately one you see falling short on Super Bowl Sunday or before.

#2: No NFL MVP has come off a Super Bowl loss the season before

Passing on Rodgers to win the award as the 2nd favorite this year on the basis that it's rare to see a repeat winner is one thing, but the favorite in this market – Mahomes (+500) – is the reigning Super Bowl loser if you want to call it that, and no player coming off that result has responded with a MVP season the following year.

Two have won the award after winning a Super Bowl title – Rodgers in 2011, Brady in 2017 – so the option for the now 44-year old Brady (+1400) to win the MVP this year still has a small historical success rate as the reigning Super Bowl champion, but given the price on Mahomes and this historical perspective that's never connected once since the start of the 2002 season, he's another name that can easily be eliminated here.

Yes, there is a first time for everything, and without question Mahomes as the talent himself, and around him to be the first Super Bowl loser to bounce back with a MVP season, but I don't know how you can ignore that previous history, especially given his price as the decided favorite in the 2021 MVP market.

This is probably more random and happenstance than anything, as the AFC spent years as a very top-heavy conference with Manning and Brady leading the way. Those guys (among other AFC winners) were able to dominate their competition in those MVP years for an AFC player, and considering the conference currently has a lot of young, talented QB's – Mahomes, Lamar Jackson, Josh Allen etc. – two of which have already won this award in their careers, the MVP dominance by the AFC could be something that continues in the foreseeable future. 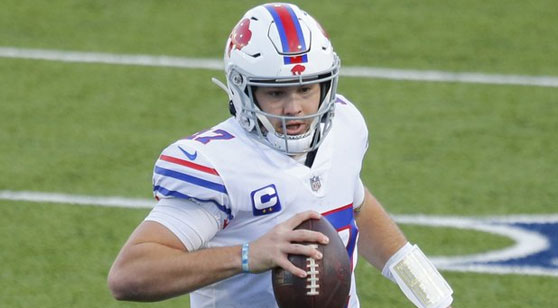 Bills' quarterback Josh Allen is in the mix as a candidate for league MVP after taking Buffalo to the AFC title game. (AP)

#4: Of the 3 non-QB's to win the NFL MVP, all three were running backs, and two of those three came from teams that didn't make the playoffs the season prior, as well as two of three coming from the NFC

The nature of today's pass-heavy NFL game makes it tough to get behind a RB for the MVP award, but if bettors are going to go that route with a selection or two, I'd isolate backs that are heavy touch guys that could be the driving force behind their franchises making it back to the playoffs.

Considering there have only been seven MVP's come from the NFC the past 20 years, and two of those seven were NFC running backs, that's where I'd start with any potential RB selections. Carolina's RB Christian McCaffrey (+4000) and Dallas RB Ezekiel Elliott (+10000) immediately come to mind.

#5: 17 of the 20 former NFL MVP's came from a team that made the playoffs the year prior

Considering no “Super Bowl loser” has won the MVP award the following year, and only two reigning Super Bowl champs have, this is where the process of elimination really starts to get interesting and useful for the 2021 markets. It means you've got 15 former winners who saw their previous season end in the Conference Championship or sooner in the playoffs, and while the addition of a 7th team to the NFL playoff picture last year adds two more teams to hone in on for this trend, it's still a great starting point.

Teams that fit this profile for 2021 (made the playoffs in 2020 but no Super Bowl appearance) are Baltimore, Buffalo, Chicago, Cleveland, Green Bay, Indianapolis, L.A. Rams, New Orleans, Pittsburgh, Seattle, Tennessee, and Washington.

Furthermore, if you want a breakdown of the playoff result the previous year for the eventual MVP's, seven of them were coming off a loss in the Wild Card game, four in the Divisional round, and four in the Conference Championship game. But starting with the QB's on those 12 teams for the 2021 MVP award is a good place to begin.

I threw in the 80.6% average win rate for teams with the eventual MVP because we get a 17th game for each team this year as that complicates the idea of just getting to 10 or more wins in a season. For a team to win 80.6% of their games this year, it would equate to a 13.7 wins, so the question bettors have to ask themselves there is whether or not their NFL MVP selection is on a team that has a chance to win at least 13 games this season.

Given how many former MVP's come from playoff teams, there are a few names/teams that have already been mentioned that could fit this profile as well, and it's another idea where merging a team's season win total numbers with a potential MVP bet on their QB can make a lot of sense.

So, to sum it all up, in order to have the best chance at success from a historical perspective in picking a NFL MVP this season, bettors will generally want to back a QB from a playoff team a year ago, that didn't lose the Super Bowl, on a team that WON'T win the Super Bowl this year but should/could get close, and will finish the regular season with at least 13 wins or 80.6% of their games. Framed that way and three names immediately come up:

Buffalo, Seattle, and Cleveland all come into the 2021 season with win totals of 10 or higher, all three were playoff teams a year ago, and at least in terms of the two AFC teams (remember we shouldn't mind leaning on the AFC teams), both Buffalo and Cleveland have some lofty expectations this year, but their tortured fanbases know all too well the feeling of being a great team and coming up short in the pursuit of a Super Bowl win.

Considering Mayfield and Cleveland already have a nice 50% historical angle in terms of just winning their division thanks to having the reigning Coach of the Year (link to COY piece), all of that Browns optimism in the marketplace is coming from a good place historically.

I'd still hold off on any Super Bowl futures with Cleveland, but is it really that hard to see Cleveland – or Buffalo for that matter – put up a 13-4 or 14-3 type season, get through a playoff game or two and then experiencing playoff heartbreak yet again?

To me, those are very possible outcomes for those two franchises in 2021, and if that's how it's going to play out for one or both of them, then backing Allen and Mayfield in the MVP market is a bit of a no-brainer.

Wilson and Seattle will likely have a tougher path given their competition just within their own division, but this was a team that spent the first half of 2020 openly campaigning for Wilson to be considered for the award.

Should Seattle end up being the kings in the NFC West and reach 13+ wins, I'm not sure how you don't have Wilson in the conversation again, as even voter sentiment on the fact that he's never won the award in his career despite having some phenomenal seasons before will crop up as a narrative, as right or wrong as that may be for a 2021 award.