Rookie of the Year - Best Bets

There is another award category to plow through a history lesson with, and if some strong trends hold up from the modern (realignment) era in the NFL, the 2021 Defensive Player of the Year might turn out to be just a five-man race.

The DROY doesn't get as bright of a spotlight as the rookies on the other side of the ball do, but when 17 of the 19 DROY winners have been 1st round draft picks, the percentages already suggests limiting the pool to the 14 defensive players that went in Round 1.

Picking the OROY tends to be a little trickier even with many #1 overall draft choices being QB's. Only three #1 overall draft picks have gone on to win this award the last 19 seasons (Sam Bradford, Cam Newton, Kyler Murray), so Trevor Lawrence as the favorite at +300 might not be as easy as it can currently seem.

And apologies to anyone already holding a Travis Etienne ROY ticket at +1800, but I don't see how he gets past his teammate Lawrence in the voting without the QB going down to injury if the Jaguars have a good enough year to where both warrant consideration.

That's too subjective though, part of why the OROY is a tougher one to pick. So let's ease into the objective facts of this award since the 2002 NFL season and see which five defensive guys are left standing.

#1: Only one time have players from the same team won both awards (Alvin Kamara and Marshon Lattimore for New Orleans in 2017)

Not sure this will be entirely in play this season as it's really only happened once because these two awards rarely go past the first two rounds of the previous NFL draft.

Back in 2017 it was actually Lattimore who the Saints picked first at 11th overall, with Kamara being the 67th selection that season. Hard to think that's how it went down now, but Kamara is part of five different Offensive Rookie of the Year winners that were selected 51st or higher in the draft since 2002, whereas the highest draft number of any Defensive Rookie of the Year winner is 36th (Darius Leonard in 2018).

Mentioned the first point on the defensive side of the ball earlier, as the other two were selections 33 and 36. So don't go drifting too far down the 2021 NFL draft results for any DROY selection.

Dallas Cowboys QB Dak Prescott is the biggest culprit for those on the offensive side of things, as he was pick #135 in 2016, the only OROY picked later than Kamara's 67th in 2017.

But an average pick number of 11.36 for the DROY is where things really get interesting as only two defensive players were picked before pick #11 and both with defensive backs – Jaycee Horn 8th overall to Carolina and Patrick Surtain II 9th overall to Denver. Both are currently +1400.

DROY favorite Micah Parsons (+500) went 12th overall to Dallas to land right on that average number, while six of the other 11 defensive players to go in the first round all went 26th or later in that opening round.

Of all the 17 past DROY winners that were 1st round draft picks, not one of the was picked higher than 18th. Which gives you that final list of five potential DROY candidates this year: Horn, Surtain and Parsons that have already been mentioned, along with Zaven Collins (+1400) from Arizona (16th overall), and Jaelen Phillips (+1000) from Miami (18th) overall.

Considering those five names are all apart of a big group at the top of the odds board, it's tough to want to venture much further. Especially when...

#3: 17 of 19 DROY winners played for a team that DID NOT make the playoffs the year before; including a run that's currently sitting on 12 years straight

The last DROY winner to win the award on a playoff team from the season before was Jerod Mayo with the New England Patriots back in 2008. Interestingly enough, he won the award in that lone “lost” year for those Patriots teams as 2008 was the season Tom Brady was lost for the year (after nearly going perfect in 2007) and New England missed the playoffs in 2008.

Twelve years running for a guy from a non-playoff team has to kill some enthusiasm for any potential DROY selection from those draft picks at the end of the 1st round, as each one of the final five 1st round picks in 2021 came on the defensive side of the ball.

The flip side of this history though is that while these DROY winners didn't start the season on a playoff team, eight of the eventual winners were on a team that made the playoffs in their rookie season. It's a trend that's really flipped to the positive side of things in recent years with each of the past four winners being on playoff-bound teams, and five of the last six as well.

So in wanting a non-playoff team from a year ago, and one that's got a decent chance of getting there in 2021, I think there are decent enough arguments there for all of those previous five names – Horn, Surtain, Parsons, Collins, and Phillips.

Playoff cases for Carolina, Denver, Dallas, Arizona, and Miami are out there, although it's the latter three I believe carry the most weight. 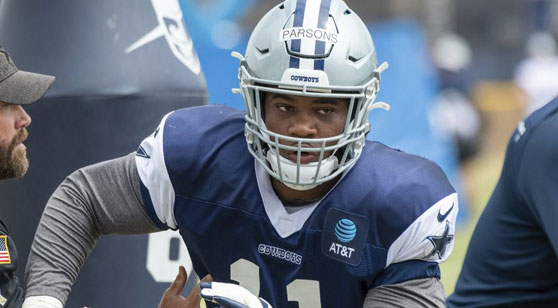 Cowboys' linebacker Micah Parsons is one of the players to keep an eye on for Rookie Defensive Player of the Year. (AP)

#4: 17 of 19 OROY winners played for a team that DID NOT make the playoffs the year before: Riding a 7-year run currently

Avoiding playoff teams from a year ago isn't just a thing for capping the DROY award, it works on offense as well. Part of it has to be ingrained in the general concept that it's hard for people to really believe an incoming rookie has made a significant impact on an already “good” team that is coming off a playoff season. At least it's hard for these guys to make a big enough impact to consider it being the best of the bunch across the league.

The last guy to do it was RB Eddie Lacy for Green Bay in 2013 after the Packers were bounced in the Divisional round the season before. The name to do it before that was WR Percy Harvin for Minnesota in 2009, so it seems to be an occasion for NFC North rookies only. You might want to expand the search to other divisions within that conference on offense though.

I guess you'll take the positives of it likely being a QB if it's an AFC guy if you're already holding a Lawrence ticket, and considering picks #1 and #2 in the 2021 draft are likely Week 1 starters at QB in the AFC, this would be have to be included in part of the argument for Lawrence of Zach Wilson (+1000).

But there has also only been one other three-year stretch during those 19 seasons where the OROY award went to a QB in three successive seasons (2010-12), and after QB's Kyler Murray and Justin Herbert won this award the last two years, that uphill climb for AFC rookie QB's to win this award this season has even more kinks in it.

#6: No Tight End has ever won OROY in the history of the NFL, and only three of the last 19 OROY winners won the Heisman Trophy and NFL OROY in consecutive seasons

The first of those two statements is self-explanatory, and while I know there has always got to be a first in everything, Pitts for as talented as he is, that's not a historical angle I'm looking to get in front of. Especially when the rookie shares a division with the defending Super Bowl champions who are still quarterbacked by arguably the best of all time.

From a pure talent perspective, Pitts being listed as the second favorite at +750 is understandable. But history suggests any bet on him is just throwing money away regardless of talent as it's not like we haven't seen some great pass catching TE's come into the league hyped up as well. One Tony Gonzalez comes to mind.

DeVonta Smith (+1800) is the reigning Heisman winner, and the last guy to pull off the Heisman/OROY exacta was Murray a couple of seasons ago, but the problem for Smith is all of those three recent occurrences came from QB's.

Even Sam Bradford – who won the Heisman in 2008 and OROY in 2010 – as the “4th” guy to have both trophies in his house the past 19 seasons played QB. So it's not like he's not working on his own “never, ever” either to win this award. Another easy pass for me.

Rookie of the Year Betting Picks

The thinking behind the five DROY selections has already been laid out, and I think you just hope those strong historical percentages hold and one of those guys does end up as the eventual winner. Getting picky and leaving one or two of them out is always going to end up in that guy(s) winning the award.

Adding more of a partial unit to Parsons would avoid the breakeven scenario if bettors aren't interested in shopping around, but after all that evidence was laid out – 89.4% of the time it's a 1st round pick selected 18th or lower on a team that didn't make the playoffs last year – and only five guys fit the bill, backing them all and adjusting as the year goes on is the gameplan.

Offensively, passing on everything was the final decision, as a big chunk of the brain does say Lawrence should win it if he's upright for all 17 games. But the lack of success for the #1 overall pick with this award and so few AFC guys winning does cause pause at his favored price, among other things.

Backing Justin Fields at +850 did cross the mind even though the Bears are coming off a playoff season, but even with me thinking he will see the field early enough in the year to have potential – Herbert didn't go into 2020 as the starter – I'm not sure the price is there for a guy you assume will be on the bench Week 1 and likely more.

The two WR's that are reconnected with their college QB's – Ja'Marr Chase in Cincinnati and Jaylen Waddle in Miami – are two interesting OROY candidates to consider if for no other reason than the concept of having a collegiate duo reconnected right away is intriguing right off the bat.

But I still believe it's better to see how Lawrence and Wilson conduct themselves as the two guys projected to start at QB from the outset. Strong performances from them early will see prices get shaded their way in a hurry, and that's when ideas on backing some of the more outlier candidates like those two WR's can make more sense.