Washington was listed as one of four road favorite squads to kick off the preseason this weekend, but the line has flipped New England to slight chalk.

Both teams are trying to figure out their quarterback situation heading into the season after coming off losing records in 2020 (even though Washington was a division champion).

New England's recent preseason history shows they have played well in exhibition games and worth a look here. 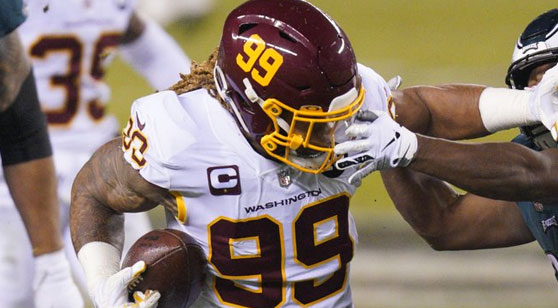 Chase Young leads Washington into New England for Week 1 of the preseason at Gillette Stadium. (AP)

It turns out that the departure of Tom Brady made a slight difference for the Patriots last season.

Brady won a Super Bowl with Tampa Bay, while New England slipped to 7-9 and missed the playoffs for the first time since 2008.

Washington owned the same exact record as New England, but the Football Team captured a division title in the horrific NFC East.

The Football Team allowed the second-fewest points in the NFC (329), while cashing the 'under' 11 times.

New England drafted Alabama quarterback Mac Jones in the first round as he will compete with veteran Cam Newton for the starting job. Newton finished last season with 12 rushing touchdowns, but threw only eight touchdown passes, compared to 11 interceptions.

Ron Rivera, on playing starters @ NE: "We're going to play our guys on Thursday, I'll tell you that right now."