The battle of Los Angeles kicks off the preseason for these teams that share SoFi Stadium. The Chargers are listed as a favorite simply because the Rams are sitting plenty of key players.

The Rams have shown over the years under head coach Sean McVay that the preseason means nothing and losing players to injury is the top concern.

Brandon Staley left the Rams in the offseason to take over as head coach of the Chargers and will be looking to make a statement here in his debut. 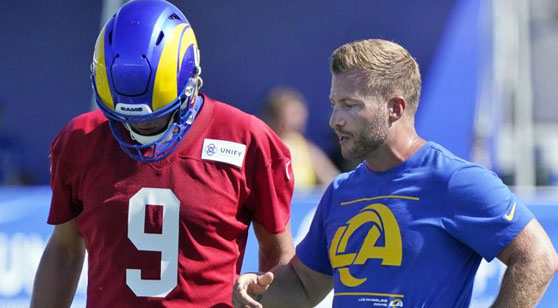 Rams' quarterback Matthew Stafford (L) will not suit up on Saturday night when they face the Chargers. (AP)

This season's Super Bowl will take place at SoFi Stadium and the question is will we see a team host for a second straight season?

The Chargers have their quarterback of the future as last year's first round pick Justin Herbert took home Offensive Rookie of the Year.

Although the Lightning Bolts finished with four consecutive wins, the Chargers went 7-9 and missed the playoffs, including losing five games by five points or less.

The Rams have moved on from quarterback Jared Goff, as they dealt the top former top pick to Detroit for Matthew Stafford, who looks to take L.A. back to the postseason.

Stafford will sit out Saturday's preseason opener, as the Rams are fresh off a 10-6 record in 2020, which was capped off by a divisional playoff loss at Green Bay.

Sean McVay says about 35 players will not play in Saturday’s preseason game.