An AFC meeting on Sunday afternoon sees the Houston Texans travel to Buffalo, New York to take on the Buffalo Bills. Opening kick off is set for 1:00 p.m. ET and will air on ESPN from Highmark Stadium.

The Bills are really good at crushing bad teams. Normally in these articles I try to bury lead, but I’m not sure anyone in their right minds is picking the Texans here. In my breakdowns this season, I've not run away from underdogs but I have absolutely zero interest in the Texans here. This game has a 16-point spread for a reason, the Bills came into this season as everyone's hot-take Super Bowl winner and the Texans came in as a team possibly facing some sort of XFL relegation.

Davis Mills did not look great last week. He highlighted a lot of the problems people expressed out of college, you need to have A+ arm-strength in the NFL and he just doesn't have it. As someone who bet on Brandin Cooks receptions last week, it was hard to watch at times. Plenty of wobbly passes along with defenses not having to respect the deep ball.

I'm not really sure what to say about this Texans team. With Tyrod Taylor they were live to backdoor cover a game every week. He's a veteran QB that is able to move the ball down the field and scare defenses. Mills has not shown me that he can do that. Overall, the Texans best shot is a backdoor cover but this Bills defense has absolutely dominated bad teams and I expect that to continue.

Like I said before, the Bills crush bad teams. This isn't a one week sample size from their blowout win against the Washington Football Team last week, it's a philosophy. Coach Sean McDermont and Josh Allen understand that the best way to maintain a lead is to do the thing you're best at, which for the Bills is throwing the ball. Most teams resort to running into a stacked box over and over again in an attempt to drain the clock and slow the game down to avoid turnovers.

This is one of the things that angers me the most as a football analyst, and something I see every week. If you can't run the ball, then don't do it. I would much rather see Allen squash an opposing team through the air and risk a turnover every once in a while then just run into a brick wall and punt.

One of the advantages of that strategy is it elevates their sup-par running backs. Zach Moss and Devin Singletary are serviceable backs but due to opposing defenses fear of what Josh Allen can do, their numbers look much better because people normally aren't suspecting them to run.

Overall, I would bet this Bills spread here even at this humongous number if I had to pick a side. People are speculating that they may stop trying as hard in the second half, with the Chiefs coming next week but I would argue that the Bills at 70% is still better than the Texans at 100%. 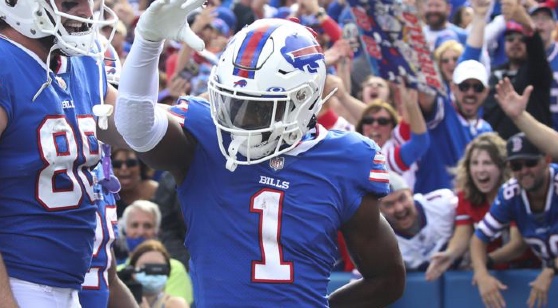 The Buffalo Bills have covered the spread in four straight games when facing a team with a losing record. (AP)

Inside the Stats - Buffalo Bills

Like I said before, this game is either a Bills spread or nothing. I have avoided player props with the Bills so far this season, and I will continue to do that this week. I would lean under on Davis Mills passing yards, but I really don't think there is a lot of value on this market. The Bills have not been great from a prop perspective because they haven't faced many tough opponents yet.