Week 4 of the NFL regular season will conclude with a heavyweight battle in the AFC West – as Jon Gruden’s undefeated Las Vegas Raiders will visit Justin Herbert and the Los Angeles Chargers on Monday night.

After knocking off Baltimore and Pittsburgh as underdogs to start the year, the Raiders finally received
the respect they deserved in their Week 3 matchup against Miami – as Las Vegas entered its latest bout
favored by four over the visiting Dolphins.

Laying points with Las Vegas didn’t pay off during last week’s overtime victory though, as Miami jumped
out to an early two-touchdown lead and ended up taking the Raiders all the way down to the wire in
Week 3 (W, 31-28 OT).

On the other hand, after splitting a pair of matchups against Washington and Dallas, the Chargers hit the
road to face the Chiefs in Week 3 for their first big test of the new season – and they aced it, as
Herbert and company racked up 30 points on 352 total yards during their impressive victory over Kansas
City this past Sunday (W, 30-24).

I’ll lay the points with L. A. here, as the Chargers were excellent on both sides of the ball against Kansas
City this past Sunday – and the Raiders are likely due for a loss after winning two of their first three
matchups in overtime.

The Chargers enter Monday’s contest favored by roughly a field goal over the visiting Raiders – marking
just the second time the Bolts’ have been favored this season.

The total for Monday night’s event sits right above OU 50, which marks the highest bar set for a Raiders’
game so far this season.

After finishing up last year with losses in five of their final seven games, the Raiders have looked like a completely rejuvenated squad to start the new season – as Vegas currently boasts a perfect 3-0 record, with two of those wins coming in overtime matchups against the Ravens and Dolphins.

Personally, I believe the Raiders’ overtime victories were the most telling of those events though, as Baltimore and Miami both managed to build early leads through the rushing game – and then ultimately fell victim to a pair of Gruden’s thrilling comebacks.

After getting off to a somewhat underwhelming 1-1 start, the Chargers were in ambiguous betting territory ahead of their Week 3 matchup against Kansas City (LAC +6.5) – as L. A.’s offense generated just 18.5 points per game in their first two matchups against the Cowboys and Football Team.

Following an impressive road performance against the Chiefs though, I’m far more comfortable siding with L. A. in Monday night’s matchup – as that’s the type of high-caliber football most imagined the Chargers playing this season, and they just scraped the surface in Kansas City last week. 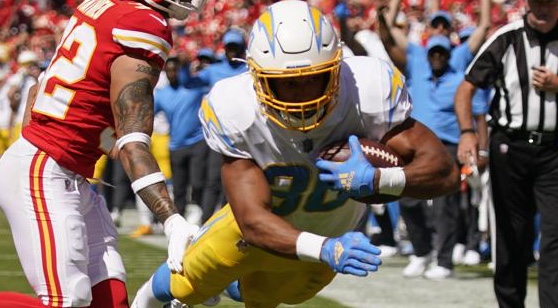 The Los Angeles Chargers have gone UNDER the point total in four of their last five games. (AP)

Inside the Stats - Los Angeles Chargers

After knocking off Kansas City on the road last week, the Chargers head into Monday’s matchup favored by a field goal over the undefeated Raiders – marking the third time Vegas has been listed as an underdog this season.

Undefeated teams tagged as underdogs are always tempting to bet on. The Chargers’ have given opposing QBs headaches all year though, as their defense currently ranks seventh in scoring and fourth in takeaways (20 PPG, 6 TA) – which is why I’m also rolling the dice on Carr throwing an interception in Monday night’s event.