Since the first meeting of the previous eight between these two was decided by a 3-2 score, there really hasn't been any middle ground. The record on the totals since then has gone 3-3-1 with all the 'over' finishing with at least seven goals, and the 'under' having three or less.

Three in four nights for the Leafs with travel in between each game suggests that a sluggish offensive effort that was there in chunks in Montreal last night could persist again this evening. This is just Calgary's second game since losing 4-2 and 5-3 on consecutive nights to Toronto on April 4th and 5th , and after having about a full work week off, Calgary blanked an Edmonton team in a rough spot themselves.

Repeat that defensive effort against a tired Leafs team and Calgary could even put a scare in the big ML payday as well. 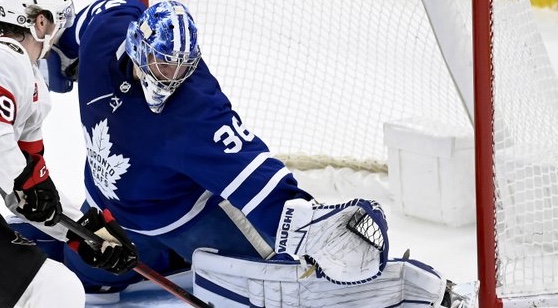 Toronto, the favorite, has seen the underdog win four of its last five home games when facing Calgary. (AP)

Calgary visits Toronto on Tuesday Apr. 13, 2021 as this North Division game set for 19:30 local time at the Scotiabank Arena.

The teams are separated in the standings by 22 points. The Maple Leafs have a goal differential of +32, while the Flames are -16.

Calgary shut out the Edmonton Oilers to snap a four-game losing streak in its last game. The Flames put up five goals, the third time they have seen a team score five goals over their last five games. Calgary has lost five straight games when playing on the road.

The Maple Leafs lost to the Canadiens on the road in their last game, 2-4. The loss snapped a six-game winning streak for Toronto, also marking the first time Toronto failed to score more than two goals over its five games.

Toronto has won three straight games against Calgary, with the Flames last win against the Maple Leafs coming on Mar. 19, 2021. The two teams have totaled a minimum of six goals in three of its last four meetings.