Calgary wasn't able to sweep their huge three-game set with Montreal over the past week, but they get a chance to make up those two crucial points in the standings here thanks to Montreal losing in Toronto yesterday. The Flames still need to likely win nearly every time out there and still get some help, but they got some from the Leafs last night, and potentially some from the schedule makers here.

Edmonton's on the latter half of a back-to-back here after sweeping their two-game set with the Jets to take a stronger grasp on second in the North division and home ice in that first round. But this is a three-in-four spot for the Oilers as well, and given the intensity of those games with Winnipeg, this has all the making of a classic letdown spot for Edmonton. With Calgary as the dog, I'll happily take the plus price. 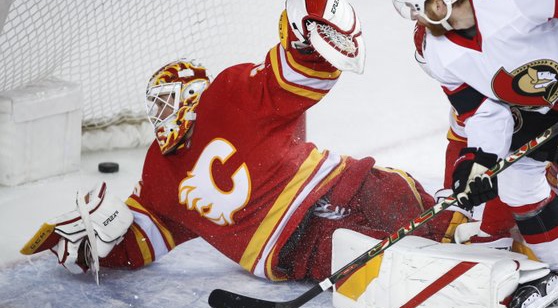 The Calgary Flames enter the Rogers Place on Thursday night, a venue in which they have lost six straight games. (AP)

Calgary is coming off a 2-1 loss to Montreal, losing three of its last five games overall. Edmonton is coming off of a 3-1 win over Winnipeg, marking the second straight win for the Oilers.

Calgary won the last meeting 5-0, although Edmonton has won six straight home games when facing Calgary. The goal total has gone UNDER in two straight meetings.