Here we've got one team coming off a game where they scored seven goals (Florida), and the other team coming off a game where they allowed seven goals (Chicago) so it's got to be an easy 'over' right? You know that's where the majority of the money will be going on this total as arguments center on what Florida's offense and Chicago's defense respectively did the other night. So it's a contrarian angle all the way here as the masses will flock to this 'over' because of what they saw last.

Yet, aside from the two meetings these two teams had during the first week of the season, the four meetings since have gone 1-2-1 O/U with three of those games having six goals or less. Heck, the last two were both Chicago wins – 3-2 and 3-0 – as somewhere in the 5-6 goal range is where I think this game tops out. 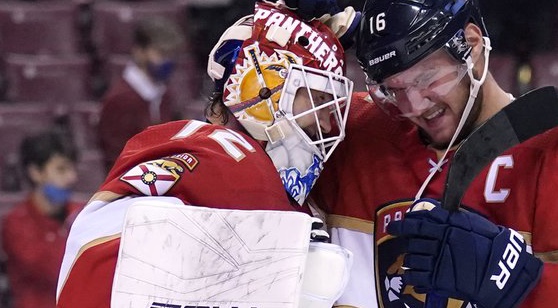 Both teams have scored at least two goals in 10 of the last 11 meetings played between the Panthers and the Blackhawks. (AP)

Florida is coming off of a 7-4 win over the Nashville Predators, winning five of its last seven games. Chicago is coming off a 7-4 loss to Tampa Bay, marking the second straight loss for the Blackhawks.

Chicago shutout Florida in the last meeting, 3-0. Chicago has also won the last two meetings against Florida. The goal total has gone UNDER in two straight meetings.