Easy scenario to believe going through the motions will quite possibly be on the agenda for both sides with a playoff series looming, but I think after Carolina went 6-0 SU to start the season series before losing 3-1 to the Preds the other night, Nashville's still got a bit more to prove.

Whether it's to themselves that Saturday's first win over Carolina wasn't a fluke, or proving it to the Hurricanes partly for the same reason, I think from a mental angle, you can only look at backing the Preds as a home dog.

Five of those six wins for Carolina were by multiple goals, and Nashville never scored three goals on a goalie in any of the meetings this year. Far more important game for the Predators to get so they can believe they'll have a chance in the playoff series, and hopefully, they'll get the win here. 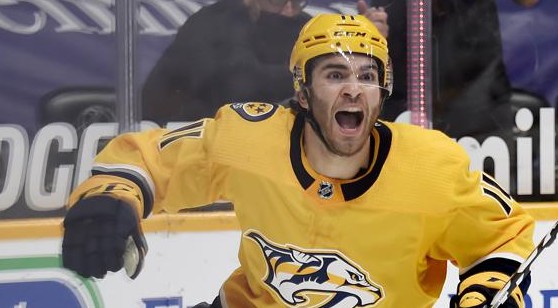 The Nashville Predators have won four of their last five home games when playing as the underdog. (AP)

Carolina has won four of the last five meetings against Nashville, along with covering the -1.5 puck line in three of the last four. The goal total has gone UNDER in three straight games between the two clubs.