The Buffaloes hit the road for the first time since Dec. 1, a 73-61 loss at UCLA while covering a 13.5-point spread as the UNDER (138.5) connected. After back-to-back losses to UCLA and Tennessee, Colorado has bounced back with five consecutive wins, including conference victories at home against Washington State and Washington, both covers as the OVER hit in each outing.

The Wildcats resumed play Jan. 3 against Washington, topping the Huskies 95-79 while failing to cover a 24.5-point number. It was their first game back since Dec. 22 at Tennessee, a 77-73 loss in Knoxville as one-point 'dogs. Arizona has scored 90 or more points in five of the past eight games, while cashing the OVER in six of those eight contests. The Wildcats had three players with 21 or more points against Washington, including Christian Koloko's 22 points with 10 rebounds and four blocked shots.

Colorado has covered each of the past two games, which is the first time all season the Buffaloes have covered consecutive games this season. Prior to the 2-0 ATS run against Washington and Washington State, the Buffaloes were 2-8-2 ATS in the first 12 games of the season.

The UNDER has connected in five of the past seven games overall, while going 41-15 in the past 56 on the road. The UNDER is also 21-5 in the past 26 games as an underdog. However, the OVER is 10-3 in the past 13 games against teams with a winning overall record. 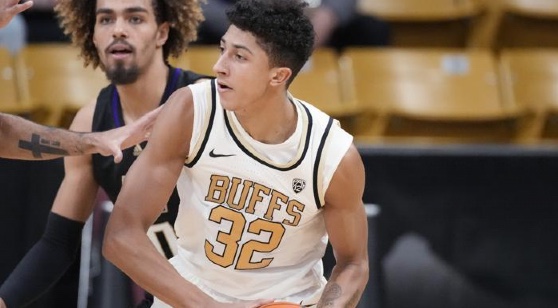 INSIDE THE STATS - COLORADO BUFFALOES

This is just the second true road game for Colorado. The Buffs covered at UCLA as 13.5-point underdogs on Dec. 1, but didn't come close to pulling off the victory. The Buffs are 1-3 ATS in the past four road games dating back to Feb. 11 of last season, too.

The Wildcats are a strong play at home, as they have one of the most dangerous offenses in the nation. Arizona is deep, boasting four players averaging 12.5 PPG or more, while Bennedict Mathurin and Azuolas Tubelis are not only the top two scorers, but they're rebounding machines, too. This is a talented team who is going to take the top spot in the Pac-12. Colorado might be able to sneak up on Arizona if they game were in Boulder, but the Buffs won't offer much resistance in this one.