The Ultimate Fighting Championship (UFC) returns with a full-crowd of fans this weekend in the Jacksonville Arena. Headlined by a rematch between the Welterweight champion Kamaru Usman and rising PPV star Jorge Masvidal, the UFC 261 card promises to be a great comeback to full-attendance events for the promotion.

Let’s dig into the most intriguing matchups and predict the winners.

This is a great fight for the Welterweight division, and more importantly, for the champion Kamaru Usman. The fans know and love Jorge Masvidal, and a fight against him will most likely increase Usman as a PPV draw.

However, that set aside, this is still a bad matchup for Masvidal, and not because he is facing a better grappler, but because he is facing an overall better fighter in Kamaru Usman. Looking at the analytics, the skill difference becomes visible. Usman averages more strikes per minute while absorbing less, and is more accurate at the same time. To top it all off Usman averages over three takedowns every 3 rounds and usually gets off some good control time on the canvas.

Let’s not forget that Masvidal has double digit losses either, while Usman is one of the most consistent fighters to ever graze the octagon. Sure, its never good to dwell too much on a fighter’s record, but I think there’s a very real consistency discrepancy between these two guys, which is shown in their records.

Masvidal needs the knockout, and I just don’t think he can get it.

Usman takes the rematch in similar fashion as he did the first time ‘round. He gets the decision win this Saturday in the main event of UFC 261. 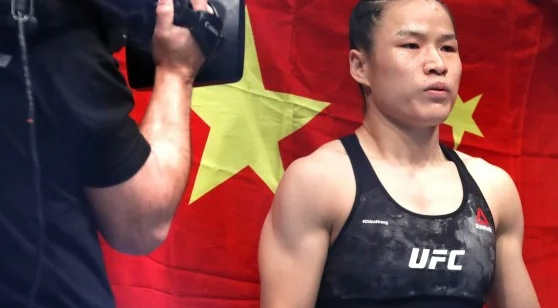 Zhang Weili has won 20 straight fights in his career, which includes five consecutive wins in the UFC. (AP)

This was always the fight to make in the UFC women’s Strawweight division, so good on the UFC for making it happen, I appreciate that as a fan.

We’ve got a champion who is actually still quite green in her UFC career despite having two title wins under the mantle already. This will only be Weili’s sixth UFC outing.

However, a 21-1 record is never to be taken lightly, and the dominance and composure she has shown in the cage has been nothing short of outstanding.

What I like most about Zhang is how flexible her approach to fighting is. She is able to change her game inside the octagon based on what her opponent shows her. Against Andrade, a hard-nosed heavy puncher, she stood her ground and found the openings for counters in between Andrade’s looping punches to great success. Against Joanna, a volume-striker, Weili upped the volume herself and went the distance to win a decision.

She is also an incredibly well-rounded mixed martial artist with plenty of submission skills to go about. Therefore, she is never really out of her depth wherever a fight goes. To top it all off, her cardio and endurance is ungodly, making her my pick for the future GWOAT.

However, on to the challenger. Rose is the former champion of the division, beating Joanna for the belt a few years back. However, in what should have been her second title defense, she was knocked unconscious by Jessica Andrade and never became the long-reigning champion she was deemed to be in the eyes of many fans. However, now she has the chance at UFC 261.

Namajunas’ biggest asset is her striking prowess, and she is one of the most devastating punchers in all of women’s MMA if you ask me. Not because she delivers devastating one-punch KO’s - although she did win the belt in that fashion - but because she is very slick and fluid with counters and angles on the feet.

However, Rose is hittable, and I feel like that is the X-factor in this fight. Rose might win the early rounds, but when the opening bell goes off in rounds 4 and 5, I think the champion will still be fresh, while the challenger might not be.

Weili starts making the fight ugly in the later rounds, and incorporates grappling and clinching to retain her title this Saturday.

Zhang is my pick for the future GWOAT, and I see her retaining her title this weekend. 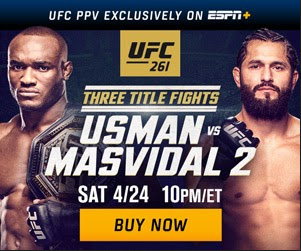 The first title fight of UFC 261 is in the women’s Flyweight division where Valentina Shevchenko is the defending champion. This is only Andrade’s second fight at Flyweight, and after a first-round destruction of ranked contender, Katlyn Chookagian, there’s a good chance that the move up in weight is positively affecting the former champion.

Shevchenko is the Amanda Nunes of the women’s Flyweight division, and she has only been bested by Nunes in her UFC career. The level of domination she displays in the cage is very impressive, and it has led her to four title defenses.

Andrade is good competition because she comes forward and wastes no time trying to get a finish. I just don’t believe she has what it takes to finish Valentina Shevchenko, if even Amanda Nunes can’t. Andrade is also significantly smaller than Shevchenko, and will surrender 4-inches in reach to Valentina who is already the superior striker if you ask me.

The ground game is all Shevchenko too, leading me to believe that Andrade probably needs a finish to win this fight. The problem is, that’s a very hard thing to do.

The constant forward pressure of Andrade will give Valentina more openings to work her technical counter striking for as long as she wants. I think Andrade needs to take a cautious approach and look for counters if she wants to win, but I don’t see that approach realized in the cage Saturday night, from Jessica.

Jessica Andrade is always fun to watch, but Valentina Shevchenko is the superior fighter everywhere. The champion retains her title this weekend at UFC 261.

Usman and Masvidal are two very tough individuals, and throughout their careers, they’ve rarely been finished.

Usman has only been finished once, via submission early in his career, and while Masvidal has been submitted, he’s never been knocked out in his lengthy UFC career.

However, let’s focus more on the X-factor aspect of this fight, which is that it is a rematch. In recent years, the winner of the initial bout wins the rematch 67% of the time. That said, with Usman’s betting line sitting at -400 we need to piggyback off an insight with a higher win rate to justify a bet on him. So let me make a case for Usman being in what i call the Jon Jones club of fighters.

13 wins in the UFC, the world’s best MMA promotion, and only one pro loss, has never been in any serious trouble, and has a tremendous fight IQ. Usman is still getting better and showing new skill every time we see him, much like Jones was when he was at the top.

For me, there’s only one way to bet if fighters are in the Jon Jones club, and that’s in favour of said fighter. Usman is the side to bet here.

This is a fight between the two best fighters in the division at the moment, which is always a pleasure to witness.

Let’s go against the narrative for this one.

On top of this, I think Zhang is getting her hand raised this Saturday. She has the better skillset and the attributes of a champion that will reign for a long time. Wide strike differential, good everywhere, and tremendous cardio.

Give me Weili on the moneyline.

The first title fight of UFC 261 is in the women’s Flyweight division, where long-reigning champion Valentina Shevchenko will defend her belt against former Strawweight champion Jessica Andrade.

Valentina will have quite a reach advantage in this fight (4-inches), which is something she isn’t used to. Regardless, it’s a big advantage for the technical striker against the juggernaut to be able to stay on the outside.

I don’t think there’s a need to go really deep into this matchup, because I simply deem Shevchenko the superior fighter all ‘round.

Forget the two losses to Amanda Nunes, ‘cause they happened at Bantamweight and Valentina’s division is Flyweight. At Flyweight I’m not sure anyone can beat her.

Price-wise, this is the best we’ve gotten on Shevchenko for a long time, and I think we should take advantage of that.