The San Francisco Dons (15-3, 2-1 WCC) travel to meet the Gonzaga Bulldogs (14-2, 3-0) at the McCarthey Athletic Center in Spokane, Wash. on Thursday in a West Coast Conference battle. Tip-off is scheduled for 11:00 p.m. ET, and the game can be viewed on CBS Sports Network.

The Bulldogs of Gonzaga have just been ridiculous lately on offense, going for 110 or more points in each of the past three games. Gonzaga has won seven in a row since a loss to Alabama on a neutral floor, and there doesn't appear to be anybody in the West Coast Conference who is going to be anything more than a speed bump. Last time out at Santa Clara, a good team, the Zags rolled up a 115-83 win to cover a 16.5-point number. Six players went for double-digit point totals, while Drew Timme dropped 32 points to go along with eight rebounds on 14-of-18 shooting, while Chet Holmgren had a double-double with 11 points and 12 boards to go along with two blocked shots.

The Bulldogs have cashed in five of the past six games overall, all as double-digit favorites. The only non-cover during the span was a 93-63 win over North Alabama as a 34-point favorite as the OVER connected on Dec. 28. Gonzaga has scored 93 or more points in each of the past five outings.

For totals, the OVER has connected in four in a row, and four straight as a favorite, too. The OVER is 7-2 in the past nine games against teams with a winning overall record, too.

In this series, Gonzaga has won 21 straight meetings since a 66-65 win by San Francisco in the Bay Area back on Feb. 18, 2012. Last season, the Zags swept the series by a combined winning margin of 31.0 PPG. 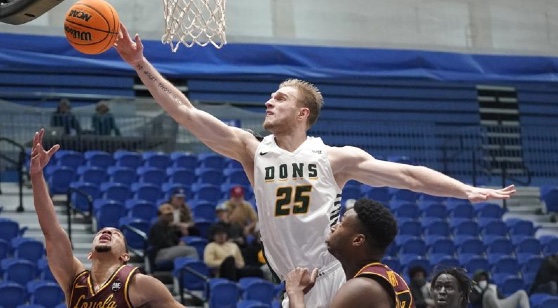 San Francisco has failed to cover its past seven road outings. (AP)

INSIDE THE STATS - SAN FRANCISCO DONS

INSIDE THE STATS - GONZAGA BULLDOGS

The Bulldogs haven't fallen to San Francisco in nearly 10 calendar years, and it's not going to happen on Thursday night, either. Gonzaga is humming along with triple-digit point totals in the past three games, cashing in each of the games with double-digit spreads. It's rather surprising that the Bulldogs aren't favored by more points in this one. Take advantage.

Nobody has been able to stop Player of the Year candidate Drew Timme, as he has exploded for 30 or more points in each of the past two games, and three times overall this season. It's offense vs. defense, as USF allows only 65.5 PPG on the season. But that's against regular teams, not a high-octane offense like the Bulldogs. It will be a win when San Francisco holds Gonzaga from getting triple digits. That's about all the Dons are going to win on Thursday in Spokane.