The NASCAR Cup Series has produced nine different winners in its first 10 races duplicating a feat that has been done only three other times in the modern era of NASCAR (1972 - present).

It’s parity galore for NASCAR 2021 with all three manufacturers having at least three wins as the series rolls into Kansas Speedway’s 1.5-mile layout for Sunday’s Buschy McBusch Race 400.

A few things we have to understand before lining your Kansas betting portfolio with wagers.

This is the fourth race of the season on a 1.5-mile track and also the fourth non-superspeedway race using the race package with engines producing 550 horsepower.

Hendrick Motorsports won the first two with William Byron at Homestead and Kyle Larson at Las Vegas while Team Penske won at Atlanta with Ryan Blaney.

The Westgate Las Vegas SuperBook posted Larson as the 5/1 co-favorite to win in part because he’s been the best driver using this week’s race package -- three top-fives, led laps in all three, and led the most laps in two of them.

Martin Truex Jr. is a two-time Kansas winner and is also a co-favorite, but it’s more about being the only driver to have multiple wins this season.

However, both those wins came using the 750 HP package at Phoenix and Martinsville. His only top-five in the 550 HP on a 1.5 this season was at Homestead where he finished third and led 17 laps. He was sixth at Las Vegas and ninth at Atlanta.

Denny Hamlin is the third and final 5/1 co-favorite based on winning two of the last three Kansas races and three overall. He’s also had top-fives on two of the three 1.5s while also leading laps. Eight top-fives in 10 starts overall this season and still no wins after winning seven times last season. 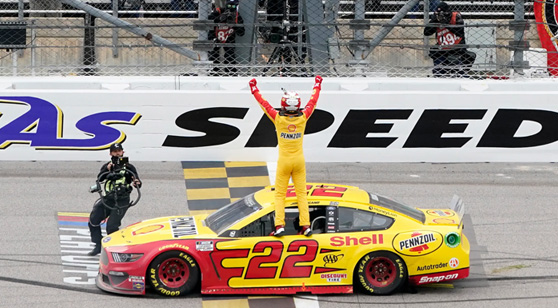 Joey Logano captured last year's playoff race at Kansas and he's expected to be in the mix again on Sunday. (AP)

Of the three co-favorites, there’s no question in my mind Larson deserves to be the lone favorite and initial focal point because of his work on 1.5s this season and he says one of those tracks they already ran at is closest to how Kansas runs.

“I’m excited to get to Kansas,” Larson said. “It’s a track I’ve run well at in the past. It seems I’ve always had speed there. Our Hendrick Motorsports Chevys have had really good speed on the mile-and-halfs this year, so that makes me even more excited to get there. Kansas is the track that I feel is the most similar to Las Vegas where we won earlier this year.”

I have a bet on Larson to win, but he won’t be the driver that I’ll make the most money on. I’ll fare the best with Joe Gibbs Racing driver Christopher Bell who is set at 30/1 odds in his No. 20, and then two other Hendrick drivers with Alex Bowman and William Byron both at 20/1 odds.

“All 1.5-mile tracks are definitely not the same,” warned William Byron about blindly labeling all 1.5s the same. “Kansas is probably the most similar to Las Vegas but, even in that aspect, Kansas has less grip. It’s a very temperature-sensitive racetrack. You have to be able to run the bottom effectively but then be able to run the top lane just as strong the longer the race goes along. I think we were good in both races last year, but I think the June race was the best shot we have had at winning there. I’m excited to get back and see what we can do this time.”

Byron has finished 10th or better in his last three Kansas races with a best of fifth-place in the fall of 2019 and he’s also led laps in his last four starts there. The No. 24 driven by Jeff Gordon won the first two Kansas races in 2001 and 2002 and won again in 2012.

Alex Bowman has run well at Kansas lately as well and comes off his best performance on a 1.5-mile track with third-place at Atlanta. Bowman has a Richmond win using the 750 HP package in his back pocket already.

Kyle Busch is an interesting look this week on the William Hill odds board at 12/1 odds. He’s the only driver to win a NASCAR event in all three national series -- Cup, Xfinity, Trucks. He’s also going to be racing on his birthday, a day he’s already won a Cup race on at Richmond in 2009. Three drivers have won on their birthday. Cale Yarborough won on his birthday in 1977 and 1983 and Matt Kenseth did it in 2012.

He certainly qualifies as a driver worth making a bet on this week just because of what he did on the last two races on 1.5-mile tracks. He was third at Las Vegas and fifth at Atlanta but didn’t lead laps in either.

“We certainly want to get back to leading laps and contending for race victories, and we just haven’t quite had that yet,” Busch said of his first 10 races in 2021. “So far this year, I feel we are stepping in the right direction. We are probably in the fifth- to ninth-place part of the field right now and I think we are close to getting into that third through sixth, and then we can progress to leading laps and we can start talking about wins. Would like to be in the mix this weekend with our M&M’S MIX Camry and get those bonus points and give us even more momentum.”

Busch led in both Kansas races last season and finished fifth in the fall. The only two top-fives for Busch this season came on tracks similar to Kansas. And the thing about Busch is that he doesn’t need a perfect set-up car to win. He just needs a car capable of a top-10 finish and he can make the difference with his skills and knowledge as a two-time Cup champion. He can turn it into a top-five and then push for the win. At a tempting 12/1 odds to win, I’ve been lured in for a wager as designed by William Hill sportsbooks. I’m also going to play him in match-ups as well.

Kevin Harvick deserves a look this week at 12/1 odds to win which would be his fourth Kansas win making him the all-time leader in wins there. Not only has he gone winless in the first 10 races so far, but he’s also placed in the top-five only three times and two of those came on the volatile superspeedway races at Daytona and Talladega where anything can happen.

It’s crazy. Nine wins for Harvick last season. None this season and none in his last 17 races overall. Hamlin hasn’t won yet either, but his team still looks like they’re using the 2020 notes with this 550 HP race package. Harvick and crew chief Rodney Childers appear to have spilled coffee on their 550 race package notes that they won seven of nine races using last season. They apparently didn’t make a copy, either. It’s as though they are starting from scratch as a new team.

Harvick leads all active drivers with a 9.3 average finish in 30 starts. He’s had 10 top-fives and 949 laps led, both also tops among active drivers. He’s raced in all 30 Kansas Cup races as have Kurt Busch and Ryan Newman.

Team Penske is probably going to have all three drivers battling for the win with Blaney and two-time Kansas winner Brad Keselowski both offered by William Hill at 8/1 odds and three-time Kansas winner Joey Logano being offered 12/1 odds at the SuperBook.

The way I see it, Blaney scooped the win at Atlanta after Larson led 259 laps. Keselowski was runner-up at Vegas behind Larson with Blaney fifth. Joey Logano? He hasn’t been a factor in any of the three 1.5s so far.

Austin Dillon at 60/1 odds should also be given some small love at the bet windows. He was sixth at Atlanta and 12th at both Homestead and Las Vegas. His RCR teammate Tyler Reddick was runner-up at Homestead showing they’ve found some speed and are ready to go to the next level with a win as they did last season at Texas with Dillon.