The NASCAR Cup Series gets back to the high downforce race package featuring engines with 550 horsepower this week for the first time since July 11 at Atlanta. It’s been used only eight times this season while the other package (750 HP) has been used 14 times which includes six road races.

Because Sunday’s Firekeepers Casino 400 is at Michigan International Speedway’s wide 2-mile oval, we get the battle of the manufacturers enhanced because it’s near Motor City. This is the Super Bowl of cars in a battle between Chevrolet, Ford, and Toyota. Ford has won the last six races at Michigan.

It’s been Chevrolet performing the best with this week’s race package winning five of the eight races. Kyle Busch won both races for Toyota, and Ryan Blaney stole a race at Atlanta in March for Ford’s win. It’s been a rough year for Ford with this package with both Stewart-Haas Racing and Team Penske struggling with it.

Brad Keselowski and Blaney have had a few top-five moments, but Joey Logano doesn’t have any. Logano has all eight of his top-fives with the other package. But Logano has something neither Blaney nor Michigan native Keselowski has, a trophy from winning a Cup race at Michigan. He’s done it three times. But I doubt he does it here this week because of Chevrolet’s obvious advantage and Kyle Busch being on a tear with this package.

And I certainly don’t want to bet him at the 12-to-1 odds I saw offered at Caesars sportsbooks by William Hill. He needs to be offered at 20-to-1 odds or higher because of his weak performances with the 550 HP package.

Another funny with the odds at Caesars was Kevin Harvick at 8-to-1 odds to win (Circa Sports has him 11/1). He leads all active drivers with five Michigan wins, 15 top-fives, and 699 laps led and his past is why he’s offered in single digits. But he hasn’t competed for a win all season. No wins in 2021 with either race package. He led the series with nine wins last season. He should be offered at least at 18-to-1 odds. Or offer a Yes/No win option on Harvick and you better believe No would be bet enough to move the odds where they should be.

Anyway, Harvick explains what it takes to win at Michigan.

“A fast car is the biggest key,” he said. “Our organization has run really well at Michigan. The Roush Yates folks from the engine side and Doug Yates, in particular, love going to Michigan. Ford, from a manufacturer’s side, loves having the manufacturers’ trophy sitting in its facility. So there is a lot of motivation going into Michigan. For us, being at a racetrack we have run well at and won at, the expectations are in the same category. We want to get to victory lane.”

All great points but he’s talking like a politician. But really, what is he supposed to say? “My car has been garbage all year and probably will be on Sunday as well.” He doesn’t have to actually say it because we know already, but Caesars doesn’t.

I’ve basically had to cut off Ford altogether. Caesars has Logano, Keselowski, and Blaney all at 12-to-1 odds. Can’t bait me with those ‘tempting’ odds. Wasted opportunity for them to get action on drivers that have the slimmest chances to win.

Caesars got the favorite right with Kyle Larson offered at 3-to-1 odds. I can’t do much with those odds (Circa Sports offers +355) but Larson has the meatiest resume coming in which includes winning three straight Michigan races for Chevrolet (2016-17), winning five races for Chevrolet and Hendrick Motorsports this season, and leading the most laps and accumulating the most regular-season points.

“It’s a totally different package; areo, engine, all that compared to when I used to win there but Hendrick Motorsports has been strong there and we have been good on all the bigger ovals this year,” Larson said. “The draft plays a big role there, so you have to be really patient when you are making moves. As long as we keep executing and being smart like we have been doing all year long, we should have ourselves in position to challenge for another win.”

Larson loves to rim-ride up top at Michigan and I’m sure it will be in his strategy again Sunday. The bizarre thing about Larson and all his greatness in 2021 is that in the last three races using this week’s race package he doesn’t have a win, hasn’t led the most laps, nor did he finish ahead of Kyle Busch in all three. 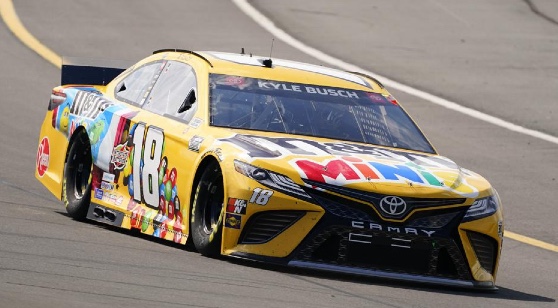 Kyle Busch has seen a Top 5 result in seven of his last 10 races, including five Top 3 results and a win. (AP)

Kyle Busch has seven straight top-fives using the downforce package after opening at Homestead with 10th-place. His team is gaining strength with the package as the season moves forward. A Twitter follower informed me Tuesday night that PointsBet sportsbook was offering 9-to-1 odds which is the best I’ve seen. Caesars is offering +650.

Busch is positioning himself nicely for his third title with only two races remaining before the Playoffs start Sept. 5 at Darlington Raceway. Already firmly entrenched as one of the 16 Playoff drivers, he’s just checking off his most important goal.

“Winning – no different than any other part of the year,” Busch said. “You want to win. You want to pick up those bonus points and get yourself a little bit better situated for the playoff run. I feel like we are a little bit behind on that. We are not terrible. We are way ahead of where we were last year, but it would certainly be nice to have one or two more wins and collect more stage points. I think we would be good with that.”

Busch has only one Cup win at Michigan (2011) which is surrounded by lots of poor performances -- bad luck. But he’s finished in the top-10 of his last eight starts there, and sixth or better in his last six. He’s also won four times at Fontana, the sister track of Michigan that is almost identical.

Other drivers on my bet radar this week are Chase Elliott who has a 7.7 average finish position in 10 starts and look away from the fact none of his two 2021 wins are in the high downforce package.

Three-time Michigan winner Kurt Busch has my attention due to winning the last race using the 550 HP package at Atlanta. He led a trace-high 144 laps to hold off little brother Kyle who finished second and led 91 laps.

I’ll give Homestead winner William Byron a look, but I’m most excited this week about Hendrick’s Alex Bowman who quietly has three wins this season, one at Pocono using this week’s package. Bowman’s last four starts using the high downforce package: fifth at Charlotte, won at Pocono, seventh at Pocono (Sunday race), and fourth at Atlanta two-mile layout.

Michigan is an easy gliding 2-mile layout with lots of room perfect for Bowman’s skill set. Last season before the shutdown he won at Fontana after leading a race-high 110 laps. Despite no top-fives at Michigan yet, this is a great track for him.

“I’m definitely excited to go to Michigan,” Bowman said. “Last year we were fast, so this year I think we know our program for that style racetrack is really strong and I think we could be really good. Excited to go there and hopefully contend for a win. It’s really cool to go to Ally’s backyard, Chevrolet’s backyard and really everyone’s backyards. Everyone has a little bit of added pressure to try to win there, and hopefully we can get it done.”

Motor City pressure. I love it. And I’m glad all the drivers and teams get it.

NASCAR gave Michigan only one race this season after having two dates every year since 1969. You know, more road courses and throwing dirt on the Bristol banks meant other tracks had to lose dates. But I really liked the two races on one weekend at Michigan last season.

The worst part of the season is over after 24 races. The next 12 races will have only one road date (Charlotte ROVAL, Oct. 10).

Last thing, best long shot with a chance to win Sunday? I think the list begins and ends with Kurt Busch (35/1) and Alex Bowman (20/1).