It’s been 97 races since Jimmie Johnson last won a race, but I’ll be betting the streak ends soon in what will be his final season racing full-time in the NASCAR Cup Series. If last week’s performance at Las Vegas was any indication -- it is, then Hendrick Motorsports should be poised to win more than once as they did in 2019 in the 18 races using this week’s race package with 550 horsepower, aero ducts, and an 8-inch spoiler. 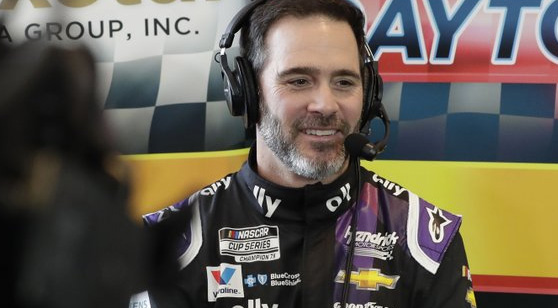 The Chevrolet Camaro made some offseason changes to its aerodynamics and got a new front end that proved to make them faster than most in Sunday’s Pennzoil 400. They didn’t win the race and Johnson’s fifth-place was the only top-10 finisher among the four Hendrick drivers, but it was clear to everywhere that Hendrick had an edge and I believe it goes much further than just the body.

They’ve got the package figured out, something that Hendrick always did before other teams with changes which is why they’ve won so many season championships. This particular race package just happened to take them longer to dominate.

I may be getting a little ahead of myself with Hendrick enthusiasm because it’s only one race using this race package and Las Vegas is a high-banked 1.5-mile layout while Sunday’s Auto Cub 400 at Fontana has a wide 2-mile layout. But there was kind of an awakening at Las Vegas that not only Hendrick was better, but everyone was better.

Nine different organizations placed cars within the top-10 and surprisingly one of the teams wasn’t Joe Gibbs Racing. Parity is a good thing in NASCAR and also great for betting the races because more candidates have a legitimate chance to win which will stretch the odds out on the usual favorites.

I don’t think the Vegas race was an anomaly even though some late cautions with a few teams pitting late shuffled the deck and produced such a diverse top-10.

JGR Toyotas were the best with this race package last season, which includes Kyle Busch winning the Fontana race last season for his 200th NASCAR career win between the Cup, Xfinity, and Trucks. They just had a bad day collectively and they’ll be fine moving forward.

But let’s get to Hendrick and what stood out in Vegas. Chase Elliott was not on my radar at 14-to-1 odds to win, but after winning the first two stages and blazing fast closing speeds at the end of fuel runs, I was ready to surrender. He wasn’t going to be stopped despite being very ordinary in practices and I knew the only way I would cash is if Elliott had some bad luck and it happened just as the final stage started as he had a flat tire and lost a lap.

But after that, William Byron started charging the same look as Elliott. I was thinking what a cool place for Byron to win his first race and looked at his crew chief Chad Knaus who won six times with Jimmie Johnson and figured I was finished as well.

And then all of sudden Alex Bowman was turning the fastest laps of the race and passing everyone but the leader. Nope, I didn’t bet him either like a dummy because he had the most success on 1.5-mile tracks within Hendrick in 2019 anchored by his first career Cup win at Chicago. I’m holding tickets with Logano and Blaney and these Hendrick cars are going to ruin my day.

But then a late caution came and a lot of the leaders pitted. I just needed two laps with Logano, who stayed out, in the lead. And it all worked out. But my lack of disrespect of the Hendrick cars coming in, like it was still 2019, had me second-guessing my bets the entire race.

The first time I watched a race at California Speedway (Auto Club Speedway) was in 2002 and I came loaded with action. I thought a rookie named Jimmie Johnson was a good bet at 30-to-1 odds because of what he had done in the previous races finishing seventh or better in five races before the Fontana race that suggested he could be really good. Plus he was an El Cajon, California native and teammate and part-owner Jeff Gordon had given him multiple chassis’ from the No. 24 garage. I also bet Las Vegan Kurt Busch at 20-to-1 who would lead the most laps that day but the two drivers battled 1-2 for the final fuel run and it was an amazing back and forth with one running the high line and the other running the low line. Johnson would win the first of 83 career Cup races on his home track.

"People always ask me what was my most special win or memory,” Johnson said. ”I guess you have to go with the first one and your last one. You never know how these things go. That first win in 2002 gave me confidence. It made me realize that I belonged in the NASCAR Cup Series and I would be able to win at this level. I couldn't have dreamed bigger or imagine things could have gone any better. It will be bittersweet taking the checkered flag this weekend. There will be so many good memories to relive. I can't wait."

Retirement? Forget about it, Jimmie. Junk cars shouldn’t force out a driver. Now if it’s a family thing and wanting to be around your daughters growing up fast, that’s cool. But the 97-race winless streak should not waver confidence. There's no skill level drop. Go get title No. 8. The dude is the best athlete in NASCAR.

Anyway, I’m betting him this week among eight drivers in odds to win wagers which includes Bowman (20/1) and Byron (20/1).

Good luck this week and while I didn’t discuss Team Penske much at all, I expect them to be hard to beat and Ryan Blaney is at the top of my list at 16-to-1 odds.

Micah Roberts has drilled back-to-back winners in his Top-Five Finish Prediction, cashing with Denny Hamlin at 10/1 odds to win the Daytona 500 and Joey Logano at 7/1 odds in last Sunday's Pennzoil 400 from Las Vegas.