Sunday’s Finish Line 150 at the virtual Dover International Speedway will be the sixth race of the eNASCAR iRacing Pro Invitational Series.

Only six races were scheduled for the regular Cup Series drivers to participate with hopes that real NASCAR racing would soon be back and it turns out their timing was perfect because NASCAR Cup Series racing will be back on May 17 at the real Darlington Raceway.

NASCAR to return May 17 at Darlington

No fans will be in attendance at Darlington but does anyone care about that right now. The iRacing was fun and made even more exciting with wagers on it at the sportsbooks, but it’s all we had to watch. No live sporting events has been brutal, so for many of us starving for action NASCAR’s announcement was the breath of fresh air we’ve been waiting for as a sign things are getting better in America.

NASCAR is the first American sport to announce its post-coronavirus gameplan and they’ve made the most of a rough situation. It was quite nervy of them to come out the way they did and they’ve said all the right things regarding safety.

“NASCAR and its teams are eager and excited to return to racing, and have great respect for the responsibility that comes with a return to competition,” said Steve O’Donnell, NASCAR executive vice president, and chief racing development officer.

“NASCAR will return in an environment that will ensure the safety of our competitors, officials, and all those in the local community. We thank local, state, and federal officials and medical experts, as well as everyone in the industry, for the unprecedented support in our return to racing, and we look forward to joining our passionate fans in watching cars return to the track.”

Yes, NASCAR is back and I love the way they’ve jammed packed the early schedule to include some double-headers similar to what they introduced for the original schedule at Pocono Raceway with two races on Saturday and Sunday. 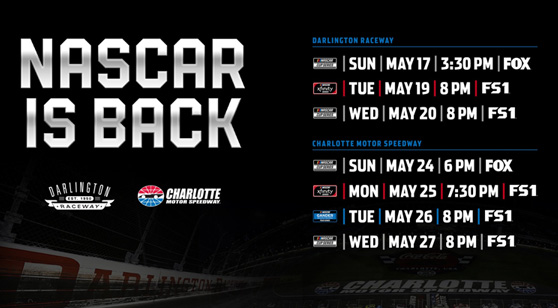 Darlington will start with the Cup season re-opener on Sunday, March 17, then the Xfinity Series will race there Tuesday night and Wednesday night the Cup Series will be back in action there with a Prime Time race.

Charlotte Motor Speedway will run the Coca-Cola 600 as originally scheduled on Sunday, May 24 making it 60 straight years of racing on Memorial Day weekend at Charlotte. The Xfinity Series will race on Monday, then the Truck Series races on Tuesday, and then the Cup Series runs a 500-mile race again on Wednesday night.

What a gift NASCAR has given its loyal fans: seven races in 10 days!!!!

I feel the weekday night races are going to be a huge hit with TV ratings and I think we’ll see more of them scheduled moving forward in the upcoming years. It’s the perfect way to combat going against the NFL on Sundays.

Obviously, with so much racing happening in the Cup Series, some things are going to be different such as no practices for any of the May events with qualifying on scheduled for the Coca-Cola 600. So notes accumulated with the 550 horsepower package at Las Vegas and Fontana will be critical for handicapping all four upcoming races at Darlington and Charlotte.

One other note to pass on is that the NASCAR Playoffs races scheduled for Darlington and Charlotte's Roval will still be on the schedule.

We’ve got lots of time to discuss the May schedule so let’s get into what is likely the final eNASCAR race to bet on. Odds are posted and I’m going out a winner which means putting most of the betting bankroll this week on William Byron at 3-to-2 odds (Bet $100 to win $150).

Byron followed his back-to-back wins at Bristol and Richmond with sixth-place at volatile Talladega. He’s the only driver with laps led in all five Pro Series races and his 327 laps led also leads the series with the second-most having led only 68 laps. Byron also was good at Dover in real cars with a 13.5 average finish in four starts.

The reason I have him on top winning here is because of what he did at Bristol when he won from the pole after leading 116 of the 150 laps. Dover is unique to itself, but I always use Bristol’s high-banked half-mile concrete layout as a reference and the correlation between the two tracks is strong as far as results go.

Let’s just call Byron the best there is on the simulators, cash a ticket, and then start handicapping an actual Cup race at Darlington.