Wednesday night’s big Lone Star battle in the Big 12 sends the No. 15 Texas Tech Red Raiders on the road to Frank Erwin Center to face the No. 4 Texas Longhorns. Tip off on ESPN2 is set for 9 p.m. (ET).

WHERE TO BET TEXAS TECH-TEXAS 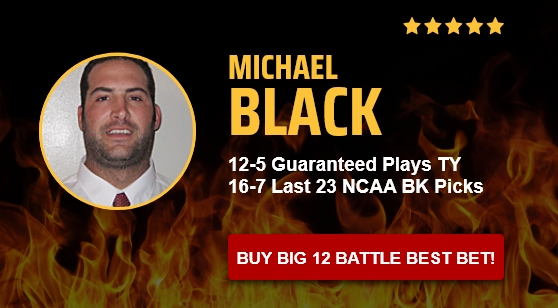 The opening spread for this game favors Texas by five points at home. The total has been set at 132.5 points. Texas Tech is 3-2 straight-up in conference play as part of an overall record of 10-3.

This past Saturday’s 27-point romp over Iowa State as an -8.5-point road favorite was its first cover against the spread in its last eight matchups. The total has gone OVER in the last four games.

A perfect 4-0 SU start in the Big 12 is highlighted by the Longhorns’ record-setting 25-point road win against Kansas on Jan. 2. They are 10-1 SU overall with a 6-5 record ATS. Texas has failed to cover in four of its last seven games with the total going OVER in the last four. The total has gone OVER in four of the Longhorns’ last six games against Texas Tech.

The Red Raiders opened up a 24-point lead at the half in Saturday’s win led by Kyler Edwards’ 16 first-half points.

The junior is one of four Texas Tech guards averaging at least 10 points per game. Mac McClung leads that group with 15.3 PPG. However, he showed up on the latest injury report as questionable for Wednesday night which is something to keep an eye on.

Terrence Shannon Jr. is next with 13.6 PPG. Overall, the Red Raiders are scoring an average of 75.5 points while shooting 44.7% from the field.

That number drops to 33.1% from three-point range. They are holding opposing teams to 58 points and 32 of the team’s 36 rebounds a game are on the defensive end of the court.

Following that statement road win against Kansas, the Longhorns have had a pair of close calls with a six-point win over Iowa State at home and a two-point road victory against West Virginia this past Sunday.

It took an Andrew Jones’ three-point bucket with 1.8 seconds on the clock to get that last win. The junior guard is one of five players averaging at least nine points a game. He is third on the list with 13.4 PPG.

Guard Courtney Ramey’s 13.8-point scoring average leads the way on a Texas team that is averaging 75.6 points and shooting 45% from the field. The Red Raiders are pulling down 40.7 rebounds and holding opposing teams to 63.7 PPG.

As mentioned, Texas Tech’s top scorer (McClung) is on the injury report but it does not appear to be anything that will keep him out of this game. The Red Raiders are going to need everything going their way to come away with a SU win.

Yet, given the rivalry at hand and the closeness of this series in the past, I'm going to roll the dice a bit and take the road team and the points.

Recent betting trends in this series also favor a higher scoring game than expected. These two match up well against one another in both points scored and points allowed.

As far as betting the total in this game, I'm going to buck the trends with a play on the UNDER. Defense prevails this time around.