The Big Ten’s Indiana Hoosiers head to Carver-Hawkeye Arena on Thursday night to face the No. 4 Iowa Hawkeyes in a 9 p.m. (ET) tip on FS1. 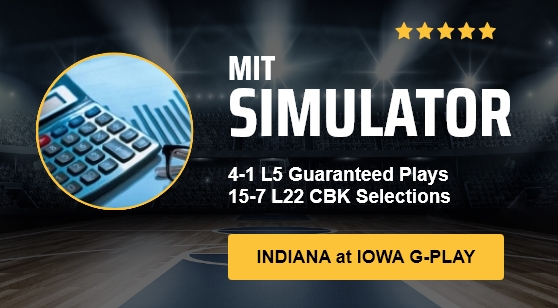 The opening spread for this conference clash has Iowa favored by 10 points at home. The betting line for the total opened at 153.5 points.

Last Thursday’s 12-point loss to Purdue as a four-point home favorite dropped Indiana to 3-4 in Big Ten play both straight-up and against the spread. The total has gone OVER in five of those seven contests.

The Hoosiers have a SU 9-4 edge in their last 13 games against Iowa and they are 5-1 ATS over the past six meetings. However, they have five SU losses in their last six road games overall.

Iowa remains a Top 5 team in the nation behind a SU record of 12-2 (10-4 ATS). This includes a SU 6-1 record in conference play while going 5-2 ATS. The total has stayed UNDER in four of the seven games.

The total has gone OVER in eight of the Hawkeyes’ last nine games against Indiana. It has also gone OVER in 12 of its last 16 games overall. Iowa is 7-0 (SU and ATS) in its last seven home games.

Indiana has gotten a strong effort from sophomore forward Trayce Jackson-Davis all season long with 20.4 points and 8.9 rebounds a game. He has been able to top each of those averages in three of his last four starts. He put up 25 points in last Thursday’s loss to Purdue.

Guard Armaan Franklin is second on the list in scoring with 12.8 PPG. Another guard Al Durham (10.5 points) leads the team in assists with 3.2.

Indiana is scoring an average of 72.6 points with 34.9 rebounds a game. It is shooting 45.9% from the field and 32.4% from three-point range. Through 14 games, the Hoosiers are allowing 67.7 points on defense. Yet, that number has climbed to 79 points over the last three contests.

Garza continues to lead the way with 26.9 points and 8.7 rebounds a game. The Hawkeyes have three additional players averaging at least 10 PPG with guard Joe Wieskamp leading that trio (14.4 points). Guard CJ Frederick (9.8 points) is shooting 51 percent from three-point range.

All this scoring adds up to 92.2 PPG on the year. Iowa is converting on 49.4% of its shots from the field and 39.5% from outside the three-point line. It ranks first in the nation in assists with 21.4 a game.

Indiana has a tall task on its hands just to keep this game closer than the current spread. Iowa has covered in its last six games as a double-digit favorite. With a week off, it should be well-rested for Thursday night and playing at home is another big edge.

There are actually no sound reasons to go against the Hawkeyes in this game ATS. I'm also leaning towards the OVER on the current total line.

Iowa has not played the stoutest defense this season, but it is very proficient at just outscoring the opposing team as the third-highest scoring team in the nation.