The Indiana Hoosiers (12-10, 7-8 Big Ten) travel to meet the Rutgers Scarlet Knights (12-9, 8-9) in a key battle between two conference members trying to remain in the picture for a postseason bid.

Both of these Big Ten combatants are in the middle of the pack in the conference, and will need a lot of help to get into the NCAA Tournament. It's not for sure, but they might have to make a deep run into the conference tournament, making the finals, or even needing to win it all to get into the Big Dance. What is for sure, they cannot afford any more mediocre play or additional losses.

Indiana is coming off a disappointing loss at home to Michigan State on Saturday, falling 78-71 as 6.5-point favorites. They were trying to win for the fourth time in five outings, as it looked like they had it going in the right direction again. But their defense let them down, allowing 78 points for the second time in three outings.

Rutgers enters on a two-game losing streak, falling to Maryland 68-59 last time out on its home floor as 4.5-point favorites Sunday. They have dropped three of the past four outings to go from squarely on the bubble to most likely on the outside looking in. That's why a win on their home floor in this one is imperative, as time is running out.

These teams met in Bloomington back on Jan. 24, with the Scarlet Knights coming away with a 74-70 win as 5.5-point underdogs as the OVER 135.5 cashed. 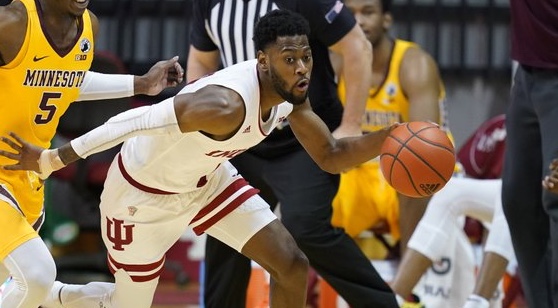 The Indiana Hoosiers are in a must-win game against Rutgers, dropping a home game to Michigan State as a current bubble team. (AP)

The good news if you plan to back Indiana, particularly on the money line, is that they haven't lost three straight games at any point this season. The bad news is that this game is in New Jersey, and they already have a loss to Rutgers in late January.

Indiana isn't really a bad team, but they're not really a good one, either. They're simply marginal, as their record indicates, and it's not just one area or another which is mediocre. It's all facets.

The Hoosiers rank 153rd, or middle of the pack, with 72.5 points per game (PPG), and they're 140th in field-goal percentage at 44.8 percent with a 34.6 percent mark on three-pointers. The one area where they have struggled is the free-throw line, hitting at just a 66.7 percent clip, good for 284th in the country.

Indiana allows 69.7 PPG to rank 165th defensively, and they're 132nd in defensive field-goal percentage at 42.2 percent. They're 193rd against the trey, allowing a 33.8 shooting percentage from behind the arc, too.

Like IU, Rutgers isn't really exception or awful in one particular area, although the Scarlet Knights are also horrific at the free-throw line. Rutgers is 192nd in scoring average (70.9 PPG), while hitting just 31.8 percent of its threes to rank 265th. They're halfway decent in field-goal percentage at 45.4, good for 106th in the nation, but they're just 62.5 from the charity stripe to rank 336th, which is just unacceptable.

On defense, Rutgers has been able to grind out wins because of their suffocating style. They have allowed just 68.0 PPG to rank 116th, and they're 123rd in defensive field-goal percentage at 42.1 percent. They're also 149th against the three at 32.9 percent.

They're coming off a 68-59 loss at home as 4.5-point favorites against Maryland on Sunday, and they have dropped three of the past four while going 2-3 ATS across the past five. They're 3-1 SU/2-2 ATS across the previous four on their home floor at least.

One thing which has been consistent for Rutgers are the totals. The UNDER is 4-0 across their past four outings, and 10-3 over the previous 13 games since the ball dropped to ring in 2021.

Confidence isn't terribly high risking hard-earned dollars on either of these sides right now. They both have a laundry list of flaws, and in a close game each is a huge concern due to their immense struggles from the free-throw line. Expect a lot of heart failure late in the game, whichever way you decide to wager.

The best bet here might be the UNDER, which has cashed in four in a row for Rutgers thanks to a marginal offense and above-average defense. In fact, that's probably the strongest play on the board. Of course, the OVER is 3-0-1 in IU's past four, and it hit in the first meeting in Bloomington, so even this bet requires a rather small-unit play.