The Wolverines are perched atop the Big Ten conference standings with an 11-1 record in the conference. The Hawkeyes also have 11 victories inside the conference, but four more losses than Michigan.

Michigan is coming off a huge win on the road against rival Ohio State in a battle of Top 5 teams which likely had big NCAA Tournament ramifications as far as the one-line. The Wolverines covered the 1.5-point number in the entertaining 92-87 victory. They have rattled off five straight wins since their shocking 75-57 setback at Minnesota on Jan. 16, their only loss of the season. They have won three straight and covered two in a row since returning from a multi-week pause due to COVID-19 concerns.

Iowa had a 1-4 SU/0-5 ATS hiccup from Jan. 21-Feb. 7, but they have rebounded with four straight wins and three covers from Feb. 10-21, including a victory over Penn State last time out. They Hawkeyes have registered 77 or more points in five of the past seven outings. 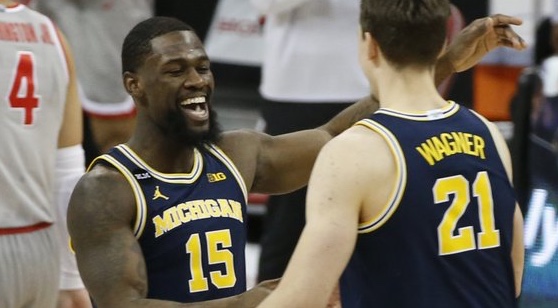 The Hawkeyes have covered three of the past four, although they failed to cover against the Nittany Lions on Feb. 21. They have had only one stretch, an 0-5 ATS skid from Jan. 21-Feb. 7, failing to cover in back-to-back games.

Iowa has posted a 4-2 SU/ATS mark across the past six games on the road, and the UNDER has cashed in each of their past four away from home. The UNDER is also a perfect 5-0 in their past five games overall.

Defensively, Iowa has allowed 72.8 PPG to rank just 244th in the land. They are solid in defensive field-goal percentage at 40.9 percent, but opponents are stroking triples to the tune of a 34.7 percent clip, or 243rd in the nation.

Michigan has won five straight overall, and they're 11-0 SU/8-3 ATS at Crisler Center this season. Their most recent showing at home was a 71-64 close call against Rutgers, failing to cover the nine-point number as the UNDER (136.5) connected. The UNDER is 3-1 in the past four games, and 6-2 across the past eight.

The Wolverines have managed a 4-1 ATS mark across the past five at home, while going 19-7 ATS across the past 26 games overall. They're also an amazing 17-5 ATS in the past 22 at home against teams with a winning road mark.

Michigan has been tremendous on both the offensive and defensive ends of the floor. The Wolverines rank 37th with 79.2 PPG, and they're 12th in field-goal percentage at 50.2 while ranking 18th in three-pointer percentage (38.7). They're also 30th in free-throw percentage at 76.7.

On defense, Michigan has allowed a 38.5 percent field-goal percentage, good for fifth in the country. They're 70th in the nation with 66.2 PPG allowed. If they have an Achilles' heel, it's against the three, as the opposition has hit at a 33.1 percent clip, just 156th in the country.

The Wolverines have a marquee game for the second straight outing, so it will be interesting to see if they can bring the intensity two games in a row. They're a marquee team, though, so it shouldn't be an issue, especially since they're on their home floor.

The Hawkeyes have struggled on the road, posting just two covers in the past seven outings, while going 1-5 ATS in the past six overall. They're also just 1-5 ATS in the previous six against teams with a winning overall mark. It doesn't look too good for Luka Garza and company in this one.