The Purdue Boilermakers hit the road for a tough conference game against the Penn State Nittany Lions. Tip for this Big Ten clash is set for 7 p.m. (ET) and will air on FS1.

Purdue enters as the road favorite, given a short -1-point spread. Purdue has only covered in 11 of 23 games this season, while Penn State is split at 10-10 on the ATS.

The point total is set at 140.5, which could also go in either direction based on trends. Purdue is essentially split at 12-11 on the O/U, while Penn State has gone UNDER in 11 of 20 games. 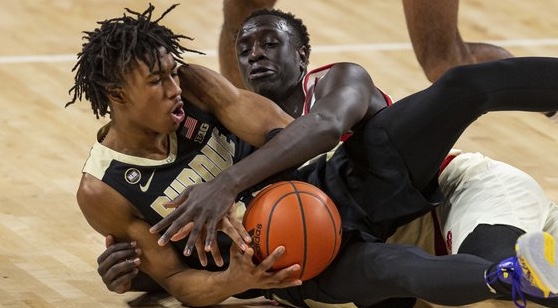 Purdue Boilermakers freshman Jaden Ivey fights for a loose basketball in their win over the Nebraska Cornhuskers on Sunday. (AP)

The Boilermakers are as dangerous as Trevion Williams is. This team will go as far as he takes them, the heart and soul of this Purdue team with a team-high 16 points and 9.1 rebounds per game. In a conference full of top big men, he is right up there with the Luka Garza's of the conference.

Sasha Stefanovic has seen his point total average dip below 10, but freshman Jaden Ivey has stepped up in the back half of the season. His offense has seen a slight increase in consistency, close to 10 points per game. His game has become much more focused since being chewed out by leader Williams mid-game a few weeks back.

With Stefanovic missing time and now seeing a point scoring slump (four or less in three of last four including two shutouts), look for Brandon Newman to step up. He makes the second-most three-pointers per game for Purdue, and averages 40% from beyond the arc.

Penn State is one of the most difficult teams to beat when playing win the road. The Nittany Lions are just 6-4 at home, but three of those four losses were by 10 points or fewer (the 10-point loss being against Ohio State). They took Purdue to an eight-point game last time out, so expect a tough outing for Purdue in this one.

Penn State's strength is the three-point shot, hitting 9.1 per game. That total ranks 39th in the nation, and third-best in the Big Ten. They're a much more efficient team when shooting three-pointers (34.5%), with four players making 1.2 or more per game. Two of those four (Myreon Jones and Myles Dread) average over two per game.

Defense is the issue for Penn State, giving up 74.2 points per game which ranks 274th nationally. John Harrar can compete with Williams down low, but Williams is the better player and should win more battles overall. This brings the backcourt of Jones and Izaiah Brockington into play, as the upperclassmen will have to look to disrupt the freshman duo of Newman and Ivey.

If the junior Penn State backcourt can win the defensive battle against the Purdue freshmen, then the Harrar vs Williams matchup might not matter. Williams winning the battle is a near given, so the idea Penn State should have is to force the Purdue freshmen into turnovers before the ball can even get to the Boilermakers' big man. This game is on Jones' and Brockington's defense.

One team should touch 70 points, each school averaging at or just above 70 per game. Penn State is allowing about 75 per game, so expect at least one team to touch 70 points.

Oddsmakers see this as a close game, understanding the threat Penn State is at home. If this game is within seven points of the given spread, then the OVER should clear with one team touching 70. The point spread is perfect to live bet Purdue if you fancy the Boilermakers, otherwise take Penn State. I'm not betting on it, but Penn State winning is expected here.

WHERE TO BET PURDUE-PENN STATE