The Richmond Spiders take on the Saint Louis Billikens in a March Madness bubble game, where the losing team is surely eliminated from an at-large bid. Tip is set for 7 p.m. (ET) and will air on ESPN2.

Saint Louis is the home favorite, given a -4-point spread although that line has climbed to -5 with some books. Both teams have the same ATS record, each covering the spread in nine of their last 16 games.

The point total is set at 144.5, which is evenly split across the board. Both teams have an O/U record of 8-8 this season, as neither market gives a clear indication of which way to lean on for betting. 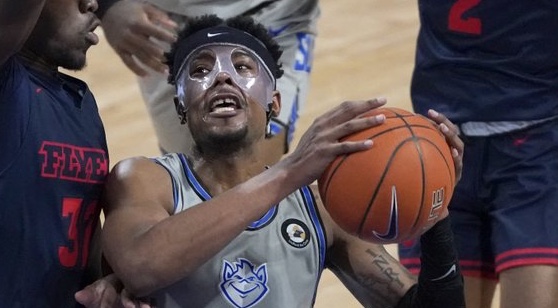 The Saint Louis Billikens are looking to snap a two-game losing streak with March Madness hopes in danger. (AP)

Richmond is playing their best basketball of the season at the perfect time. The once ranked Spiders find themselves on the March Madness bubble, looking in from the outside currently.

This team was ranked for a reason, with five players all averaging a double-digit point total that has led to the 55th-most efficient offense in the country. Blake Francis averages 16.6 points per game, while both Grant Golden and Tyler Burton each average over 12. 3 points and 6.4 rebounds per game.

Golden also leads the team in assists per game, which the Spiders average 14.9 of per game (ranks 77th in nation). They also get a lot of steals, averaging 8.7 per game which ranks an impressive 18th nationally. Jacob Gilyard averages 3.6 steals per game, as the Spiders rely on various players in different facets of the game.

The weakness is bench play for Richmond, but the Spiders have won four of their last five games with exactly 79 points in three of those games. The offense is clicking, while the defense is holding teams to 65 points or less in four of its last five games.

Saint Louis is hanging on by a thread to get into March Madness, as this is a must-win home game. The Billikens saw one of the longest COVID-19 pauses for any school this season, and haven't played well since returning.

The once ranked school has lost two straight games after winning four in a row. Although Saint Bonaventure was a huge win, the Billikens last three wins came against La Salle, Rhode Island and Fordham. They also lost to La Salle prior to the winning streak, while dropping two against Dayton this season.

The offense has disappeared, failing to touch 70 points in four of its last five games. Keep in mind that this team averages almost 80 points per game, so not being able to touch 70 for a long stretch is worrisome. Jordan Goodwin is still a force, averaging a double-double although teammate Javonte Perkins leads the team in points per game.

Inside the Stats – Richmond Spiders

Inside the Stats – Saint Louis Billikens

This is a difficult game to wager, with no clear trends to back bets on. With neither team allowing 70 points per game but each averaging right at 75 themselves, expect the point total to loiter in that range. Saint Louis has failed to touch 70 points in recent games, although they've only allowed 70 points or more once in its last six games.

It's unlikely both teams touch 75 points. Add the Billikens struggling offense mixed with solid defense at home, take the somewhat generously high 144.5 total and play the UNDER. A winner is a toss up, but if you must take a winner then go with Saint Louis who has won 10 of its last 11 home games.

WHERE TO BET RICHMOND-SAINT LOUIS