The No. 3 Michigan Wolverines and the Indiana Hoosiers get things started early on Saturday in the Big Ten with a 12 p.m. (ET) tip at Simon Skjodt Assembly Hall.

Michigan heads on the road this Saturday as a nine-point favorite. The opening betting line for the total has been set at 138.5 points.

The Wolverines extended their current straight-up winning streak to six games with Thursday’s 18-point romp over Iowa as five-point home favorites. They are 5-1 against the spread during this run with the total staying UNDER in four of the last five contests.

Michigan also has a seven-game winning streak against Indiana both SU and ATS. The total has stayed UNDER in four of those seven contests.

Indiana has dropped three of its last four games both SU and ATS with Wednesday’s 11-point road loss to Rutgers as a 3.5-point underdog. It is now 7-9 SU (6-9-1 ATS) in Big Ten play. The total has gone OVER in its last five games.

The Hoosiers have lost four of their last six home games both SU and ATS. The total has gone OVER in five of those six contests. 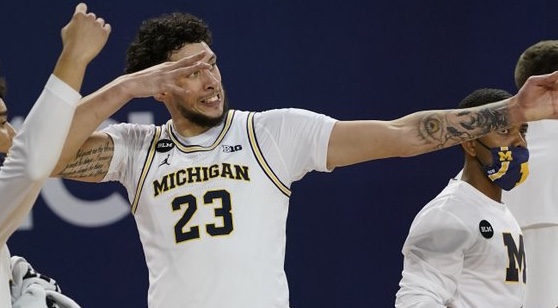 The Michigan Wolverines are coming off an impressive home win against the Iowa Hawkeyes, seemingly locked for a No. 1 seed. (AP)

Michigan moved one step closer to the Big Ten regular season title at 12-1 SU in conference play. Freshman center Hunter Dickinson has played a big role in his team’s success this season as the leader in both points (14.9) and rebounds (7.8).

He scored 14 points with eight rebounds against Iowa after putting up 22 points in a big road win against Ohio State on Feb. 21. Forward Isaiah Livers (14.4 points) and guard Franz Wagner (12.9 points) are the other two players scoring in double figures.

As a whole, the Wolverines are averaging 79.2 points while pulling down 39 rebounds a game. They are shooting 50% from the field and 39.1% from three-point range. After holding Iowa to just 57 points on Thursday night, Michigan’s points-allowed average on the year is 65.7.

Indiana has slid into a tie for ninth place in the Big Ten standings with recent losses to Michigan State at home and to Rutgers on the road. It is 12-11 SU overall.

Forward Trayce Jackson-Davis remains the Hoosiers’ top scoring threat with 20.3 PPG. He also leads the team in rebounds with 9.5 a game. Guard Armaan Franklin is the second leading scorer with 11.6 PPG but he remains questionable for Saturday with an ankle injury.

Indiana is scoring an average of 72.1 points this season while shooting 44.4% from the field and 35% from outside the three-point line. It is pulling down 35.3 rebounds a game.

Defensively, the Hoosiers have given up more than 70 points in each of their last five games. This has boosted their points-allowed average on the year to 69.9.

Michigan is not the kind of team you would want to bet against right now, and it is playing a team it should beat while easily covering the closing spread. The Wolverines are not only the class of the Big Ten, they have a legitimate shot at winning a national title this season.

Scoring should not be an issue for the Wolverines’ biggest guns on Saturday. Indiana will struggle to reach its season scoring average, but the total score should still go OVER the current betting line.