This Sunday’s college basketball betting action in the Big Ten gets underway at 2 p.m. (ET) on CBS with the Michigan State Spartans on the road against the Maryland Terrapins at the XFINITY Center.

Maryland gets the early nod in this matchup as a three-point home favorite. The opening betting line for the total has been set at 133.5 points.

Michigan State (7-9) continues to make a late-season push towards a .500 record in Big Ten play with a straight-up three-game winning streak. It also covered against the spread in those three victories after going 3-14 ATS in its previous 17 contests. The total has gone OVER in three of the last four games.

The Spartans have won four of their last five games against Maryland SU with a 3-1-1 record ATS. The total has stayed UNDER in three of the last four meetings.

Maryland is 8-9 SU in conference play after winning its last four games SU. It has gone 3-1 ATS in the same span after failing to cover in five of its previous six outings. The total has stayed UNDER in seven of its last nine games.

The Terrapins are 4-2 SU at home this season in conference games but just 2-4 ATS. The total has stayed UNDER in four of those six games. 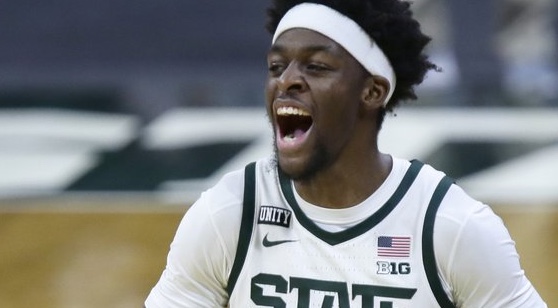 The Michigan State Spartans and Maryland Terrapins battle for a bubble spot in this year's March Madness Tournament. (AP)

The Spartans played one of their best games of the season in Thursday’s four-point win at home against Ohio State as four-point underdogs. They also beat Indiana on the road and Illinois at home getting seven points on the closing spread in each game.

Aaron Henry scored 18 points against Ohio State after posting 20 points in the upset over Illinois and 27 points against Indiana. The junior forward has been Michigan State’s top scorer all season with 15.3 points per game. Forward Joey Hauser (10.2 points) leads the team in rebounds with six a game.

The Spartans are averaging 71.3 PPG and shooting 43.2% from the field. This drops to 33.3% from three-point range. They are averaging 38 rebounds a game.

They have not allowed more than 72 points during this three-game run. Michigan State’s points-allowed average this season stands at 71.5.

Maryland just beat Rutgers by nine points as a 4.5-point road underdog in its late-season winning streak. Guard Aaron Wiggins paced the upset with 13 points and 10 rebounds. Guard Eric Ayala had the hot hand in a recent win over Nebraska with a career-high 24 points.

Wiggins is averaging 13.5 points and 5.8 rebounds a game. Ayala is the Terrapins’ leading scorer with 14.6 PPG while shooting 45.4% from the field and 35.7% from three-point range. Forward Donta Scott (11.8 points and 6.7 rebounds) is another big part of Maryland’s lineup.

<p. The Terrapins have only given up an average of 59.8 points during their four-game winning streak. The season average is 65.3 PPG.

Both of these teams are playing at a high level at the right time of the season. That should keep Sunday’s contest close to the final buzzer. I'm giving Michigan State the slight edge in a SU money line bet.

My ‘best bet’ play for Sunday would be the UNDER on the total line. The recent victories for each team can be heavily attributed to elevated play on the defensive end of the court.

WHERE TO BET MICHIGAN STATE-MARYLAND