The Louisville Cardinals (13-5, 8-4 ACC) travel to meet the Virginia Tech Hokies (15-5, 9-4) at Cassell Coliseum in Blacksburg, Va. at 7 p.m. ET on ESPN2 in a key ACC battle between two teams jockeying for seeding ahead of the conference tournament.

Louisville continues its road trip after an emotional 80-73 overtime win against Duke at Cameron Indoor Stadium in Saturday as five-point underdogs. It was a big win for a Cardinals team which has been searching for signature wins after being dumped by some of the mid-level and upper-echelon teams this season.

Remember, the Cardinals are just two games removed from a 99-54 beatdown in Chapel Hill against North Carolina on Feb. 20. With that fresh in their minds, they beat and covered at home against Notre Dame, which wasn't unexpected. But they rallied in their second straight road game in the Triangle, completing the season sweep of Duke in the process.

Virginia Tech will have revenge on its mind, as they fell to Louisville at the KFC Yum! Center on Jan. 6, although the Hokies did cover the number at 3.5 points as the OVER (132) easily connected.

The Hokies used that game as a bit of a wake-up call, rattling off three straight wins and two covers before falling flat at Syracuse on Jan. 23. They picked up a signature win over rival Virginia on Jan. 30, but have been stuck in neutral since flipping the calendar to February.

They're 2-2 SU/1-3 ATS with a 2-2 OVER/UNDER mark in four games, which also having a 17-day hiatus due to COVID. They look to be on track after an 84-46 spanking of Wake Forest, covering a 10.5-point number, but wins against the Deacs haven't been indicative of much, as they're garbage this season. A win over Louisville would enhance their NCAA Tournament resume for sure. 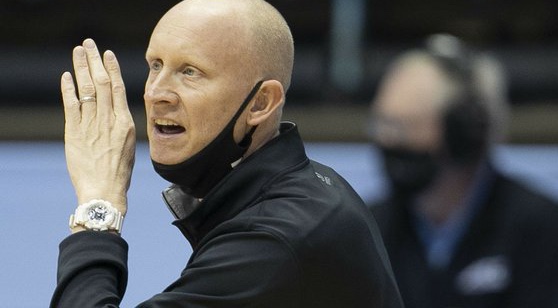 The 80 points Louisville hoisted up at Duke on Saturday was its most since hanging 86 on Prairie View A&M back on Nov. 29 in a non-conference tilt. And remember, that win over the Blue Devils went to overtime. The most points they have had in regulation inside the conference was 77 against conference punching bag Wake Forest. They're not a prolific offense by any means.

The Cardinals are dealing with the injury bug, too, which is testing their depth. Aidan Igiehon (groin) was already out for the season after playing five games. Bench player Malik Williams suffered a foot injury in the Duke game and is out, likely, for the rest of the season. Bench player Josh Nickleberry is also questionable, as he is returning from illness. Last week it was determined he is not COVID positive, and he is just working on getting his timing back.

It's actually been amazing what Louisville has been able to do this season, as they haven't been 100 percent healthy with their full cadre of players at any point.

Louisville ranks just 241st in the nation with 69.2 PPG, and they're a dismal 300th from behind the arc with a 30.7 three-pointer percentage. Defense is its bread and butter, and they hold foes to a 66.2 PPG average, good for 66th in the land, and they defend the perimeter well at 30.5 percent against the three, good for 38th in the nation.

Virginia Tech has been dealing with a big injury themselves, as they lost Jalen Cone (ankle) in early February to an ankle injury, and he remains out indefinitely. Cone is fourth on the team with 9.2 PPG, and one of its best free-throw shooters at 84.6 percent. He is also a good ball handler, turning it over just 12 times in 15 games played while averaging about 20 minutes.

Other than that, though, the Hokies remain rather healthy now that they're back from a 17-day pause due to COVID.

Since returning they were rolled at home by Georgia Tech, 69-53, before absolutely lambasting Wake Forest 84-46, so it's hard to know which Virginia Tech team will show up. The sloppy, rusty side, or the ultra-focused one? You can likely chalk the Ga. Tech game up to rust, as they hadn't played since Feb. 6 in Miami, the game which they lost Cone, by the way.

Inside the Stats – Louisville Cardinals

Inside the Stats – Virginia Tech Hokies

The last time these teams met on Jan. 6 in Louisville, they combined for 144 points against each other for an easy OVER result. That was rather surprising given that they're both slow and methodical on the offensive end, and solid defensively. It was sort of like the negative plus negative equals a positive math equation.

I think this one could come down to the final ticks, and I wouldn't feel comfortable either laying the three with the Hokies, as they figure things out without one of their starters Cone, or catching the trey with the Cards, as they are lacking some depth right now. Louisville is also coming off an emotional OT win at Duke, and there is concern if they can ratchet that intensity back up again for a good team, but one which isn't quite a traditional power like the Blue Devils.

WHERE TO BET LOUISVILLE-VIRGINIA TECH