The Connecticut Huskies head to the Prudential Center this Wednesday night to square off against the Seton Hall Pirates. Tip-off on FS1 for this Big East battle is set for 6:30 p.m. (ET).

The opening betting spread for Wednesday night slightly favors Seton Hall by 1.5 points at home. The total line has been set at 135.5 points.

The Huskies have won four of their last five games straight-up and against the spread. The total gone OVER in three of those five games.

They lost to Seton Hall by seven points at home on Feb. 6 as slight one-point underdogs. Connecticut still has a SU 8-2 edge in the last 10 meetings with the series tied 5-5 ATS. It is 6-2 ATS in its last eight road games overall.

Seton Hall has lost its last two games SU while failing to cover in its previous four outings. It is 2-6 ATS in its last eight games with the total staying UNDER in four of six outings heading into Wednesday night’s contest. 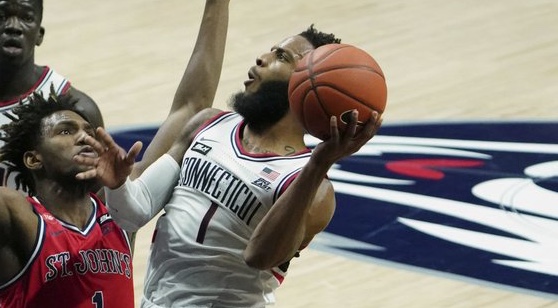 The UConn Huskies have had to rely on R.J. Cole most of the season, with star James Bouknight missing time. (AP)

At 9-6 SU in Big East play, UConn is third in the conference standings with two games to play. James Bouknight led the way in Saturday’s 18-point romp over Marquette at home with 24 points.

The sophomore guard is averaging 20.5 points per game while shooting 47.1% from the field. That drops to 30% from three-point range. Guard R.J. Cole is the team’s second-leading scorer this season with 12.8 PPG. He added 21 points to Saturday’s winning cause.

The Huskies have averaged 71.1 points with 37.7 total rebounds a game. They are shooting 43.6% from the field with a 33.8% conversion rate from outside the three-point line.

Defensively, Connecticut has held opposing teams to fewer than 70 points in its last four games. The season average in points allowed is 64.6.

With those two latest losses, Seton Hall has slipped to 10-7 SU in conference play to add a sense of urgency to its final two regular season games.

Senior forward Sandro Mamukelashvilli has been the team leader in points (17.8) and rebounds (7.1) all season long. He ended up with just 11 points and three rebounds in last Wednesday’s stunning road loss to Butler with the Pirates favored by 7.5 points.

Sandro did score more than 20 points in three of his previous four starts. Guard Jared Rhoden is second in scoring with 14.6 PPG. Seton Hall is averaging 72.2 PPG and shooting 44.8% from the field. This number falls to 32.5% from three-point range.

The Pirates are pulling down 34.5 rebounds a game while allowing an average of 69.4 points on defense.

Inside the Stats – UConn Huskies

These teams matchup well but I have Connecticut evening-up the season series with a SU win on the road this Wednesday night. Having Bouknight back in the lineup after missing several games due to injury has made all the difference in the world down the stretch run of the regular season.

These two teams combined for 153 points in the first meeting against a total line of 132.5 points. I have this game going OVER has well with another strong offensive output from each side.

WHERE TO BET UCONN-SETON HALL