A conference showdown in the SEC on Saturday sees the LSU Tigers take on the Missouri Tigers in a huge game. Tip is set for 3 p.m. (ET) and will air on the SEC Network.

There is no opening spread for this game, as the opening line is a straight pick em. Both teams have an almost identical SU record this season, although Missouri is better at covering the spread. 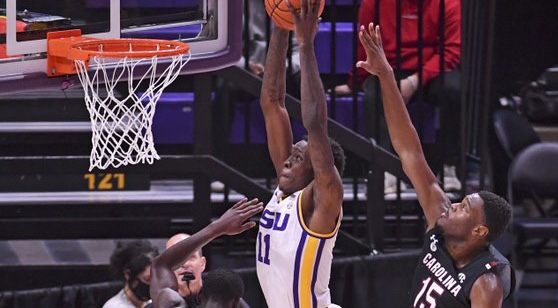 The LSU Tigers visit the Missouri Tigers on Saturday, as the teams own a combined 25-16-2 point total record this season. (AP)

As mentioned, the Tigers have a highly prolific offense. They score the ninth-most points per game in the nation, along with the 20th-highest offensive efficiency rating. They feature three players that average 16 points or more per game.

Leading the way, however, is Cam Thomas who averages a jaw-dropping 22.8 points per game. Any player who averages that many points can carry a team in March Madness. The issue with LSU is the defense though, giving up the 286th-most points per game in the nation.

Missouri is trying to gain traction on a little bit of momentum since losing three straight games. The Tigers have won two of their last three games, with the last victory coming against an impressive Florida team. They now return home, where they have seen overtime in two of their last five games (TCU and Arkansas).

Missouri's defense isn't much better than LSU's, allowing 71.5 points per game which ranks 217th. The stand out stat for Missouri lies on the free throw line, where the club ranks 51st nationally in attempts per game and 75th in free throws made per game. However, they shoot 69.5% from the line, which ranks 217th.

This points to Jeremiah Tillmon, a huge contributor for the Tigers but only 50.9% from the line. Look for teams to continue sending him to the line to miss free throws, attempting more per game than any other Tiger. Xavier Pinson, Dru Smith and Mark Smith shoot near or above 80% - while two other Tigers shoot over 83% from the line.

Inside the Stats – LSU Tigers

Inside the Stats – Missouri Tigers

If this is a close game and LSU is smart, they'll foul Tillman to send him to the line. Missouri makes two-point shots extremely well though, which is where the LSU weakness lies on defense - the rim. Missouri might be able to exploit this and get ahead early, but the odds seem to point to the total instead.

Despite a high 154.5, the combined O/U for these schools is 25-16-4, slightly favoring the OVER. Feel free to lean in that market instead of the pick em, but Missouri at home (with the better ATS record) would be the play if you fancy that market instead.