The No. 17 Oklahoma State Cowboys square off against the No. 6 West Virginia Mountaineers this Saturday in each team’s Big 12 regular season finale. Game time from WVA Coliseum is set for 2 p.m. (ET) on ESPN2.

The opening spread for Saturday’s showdown favors West Virginia by seven points at home. The betting line for the total has been opened at 149.5 points.

Oklahoma State’s nine-point loss to Baylor on Thursday snapped a straight-up five-game winning streak. Covering as a 12-point road underdog, it is now 5-0 against the spread in its last five games. The total has gone OVER in the last four outings.

The Cowboys lost to West Virginia by three points on Jan. 4 as slight 1.5-point home underdogs. They are 0-3 both SU and ATS in the last three meetings. West Virginia is 4-1 SU in its last five games with Thursday’s nine-point win at home against TCU. It failed to cover as 13-point favorites to slip to 3-3 ATS in its last six contests. The total has gone OVER in nine of its last 11 games. 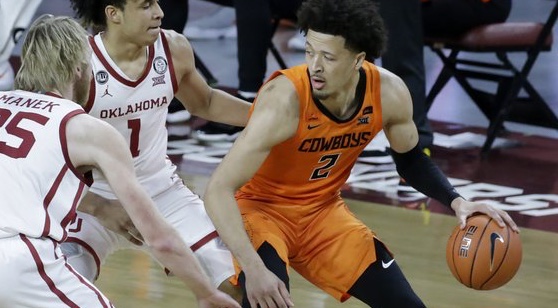 Oklahoma State fell to 10-7 SU in Big 12 play with Thursday’s lost. The big question for Saturday’s finale is the health of freshman sensation Cade Cunningham. He rolled his left ankle in that game. Guard Isaac Likekele remains questionable with a hand injury. Cunningham is the Cowboys’ leading scorer with 19.7 points per game.

Guard Avery Anderson III is next on the list with 10.2 PPG as part of a group of six players averaging at least nine points a game. Oklahoma State is scoring an average of 76.3 points with 38.8 rebounds a game. It is shooting 46.2% from the field and 33.9% from three-point range.

After giving up 75 points or more in each of their last three games, the Cowboys’ points-allowed average this season is 72.

At 11-5 SU in conference play, West Virginia can lock-up the No. 2 seed for the upcoming Big 12 Tournament with a win on Saturday. Freshman guard Jalen Bridges made his presence known in Thursday’s victory with 22 points and 12 rebounds.

Guard Miles McBride (15.4 points) and forward Derek Culver (14.8 points) are the Mountaineers’ top two scorers this season. McBride is shooting 41.9% from the field and 42.6% from three-point range.

As a whole, West Virginia is scoring an average of 77.5 PPG while shooting 42.9% from the field. This drops to 36.7% from beyond the three-point line. Of the team’s 38.8 total rebounds, Culver is averaging 10 a game. On defense, the Mountaineers are giving up an average of 71.6 PPG.

Betting this game is going to hinge on the availability of Cunningham for Oklahoma State. He is currently listed as questionable, and conventional wisdom dictates that he will sit this one out.

I still like West Virginia SU and ATS at home either way. The Mountaineers have struggled with consistency at WVA Coliseum this season but I am expecting their A game on Saturday with the No. 2 seed on the line.

I also expect the total to go OVER the current total line. West Virginia has posted some strong trends leaning that way all season long.

WHERE TO BET OKLAHOMA STATE-WEST VIRGINIA